LED lights on the bike with power bank 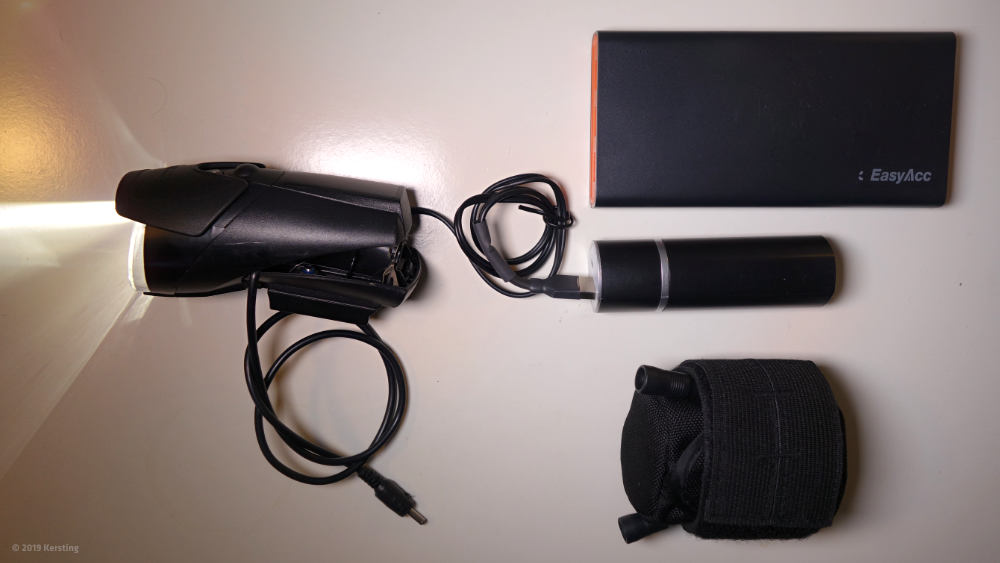 ZAt the beginning of every winter I search again for the perfect bike lights for the dark season. It must be very bright, the roadway must be homogeneously illuminated and the batteries should last at least eight hours even in wintry temperatures. With that I personally come out for two weeks without reloading. What could be better than to get cheap in the late summer Busch & Müller Ixon IQ-Speed ​​with external battery pack including second connection for another LED headlights. Difficult, or as outrageously expensive then turned out unfortunately the desire for another, Ixon Speed ​​single headlight including cable. I was not ready for a bare single copy again just 100, - to push EUR over the counter. But I really wanted to drive the extremely attractive 2 x 90 Lux this winter. Especially since a second headlight on the bike is now approved, if both have the KBA mark. The Ixon Premium and Speed ​​lights are not compatible with each other, although they look identical. 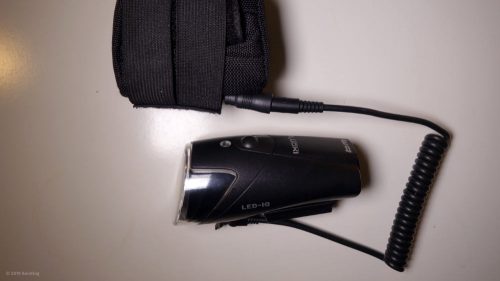 Unfortunately, the Ixon Premium does not light up with the B & M Powerpack

That means that the cheaper Ixon Premium cannot be operated with the Speed ​​battery pack via the charging socket. A prankster who thinks bad, because according to the network, this should still work for very old Ixon models. B&M has somehow manipulated the circuit so that the lamp cannot be operated as a second lamp on the in-house power pack. The purchase of another, sinfully expensive Ixon Speed ​​is necessary.

Since a simple hobby idea came to me: Instead of a second Ixon IQ-Speed ​​simply convert my already slightly cracked Ixon Premium spotlight on cable connection, take out batteries and then connect directly to the Ixon Speed ​​Powerpack with. That would have several advantages: 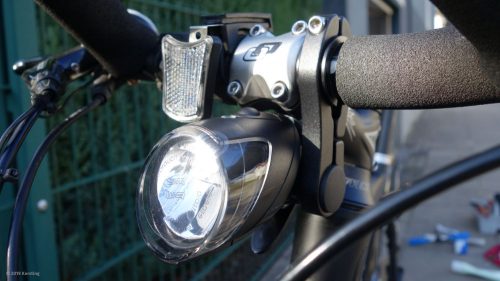 As you can see in the photo, I have spared no effort to center the Ixon IQ Speed ​​LED headlamp, inconspicuously and at least with minimal theft protection attach. I have no desire to fumble the coveted lamp with every purchase only because of long fingers on the strap. Remains the battery: This is now loose in a small frame bag and can be easily taken when parking. 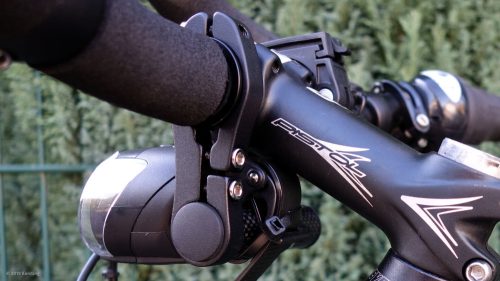 The most important part of the theft protection consists of camouflage: The lamp looks fixed, the quick release is almost invisible. In addition, I have taped all B & M original graphics with black foil. In addition - if only for my own reassurance - the clamped construction is still secured with a very thick cable ties. Simply open and peel off is so impossible. 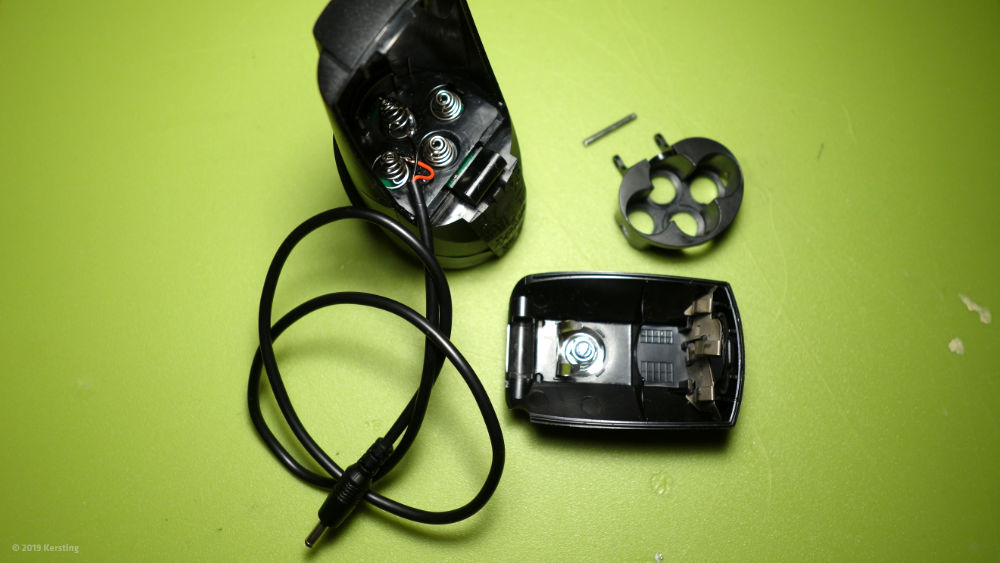 In contrast to the Ixon Speed ​​with a small, existing cable socket under the housing as a power supply, a cable must be soldered to the Ixon Premium, as this headlight is normally operated with four AA battery cells. The likewise existing cable socket under the housing Can not be used to directly power the LEDs, at least for my model, It is just a charging socket for the optional supplied battery charger. According to network research, but this may possibly work on older Ixon IQ models. You should try it out first with a suitable plug, because then you can spare yourself the following soldering.

For soldering a suitable powerpack cable to the headlight the battery cover must first be removed. For this, the small metal pin of the lid hinge is pressed out with a nail, a pop rivet or the like. This is hakelig and requires some strength without use of force as well as the right tool. Thereafter, the contact springs are so far free that the soldering a two-wire cable with jack is relatively easy. The cable cross-section must not be too thin, because the LEDs require a high amperage when switched on, as we will see later. 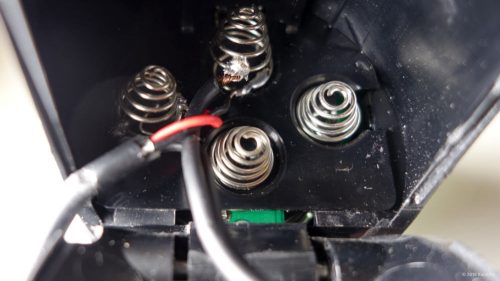 In the photo below you can see the different cable diameters. The USB port requires a cable thickness that is only slightly below that of normal 220 V lines.
Please note: I am not liable for the risks and consequences that can arise from this construction manual. In the event of a short circuit, batteries can start to burn! Only build on your own risk if basic electrical engineering knowledge is available. Safe handling of a soldering iron is required. 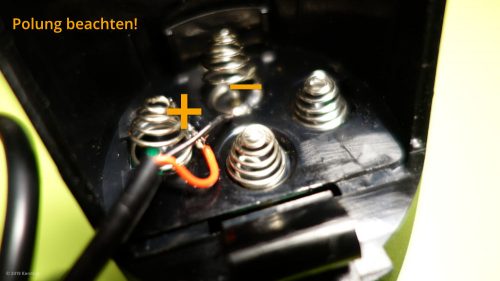 The contact springs I've bent something up and wrapped the stripped cable just around the first spring coil, so that I will not install the option of self-sufficient AA assembly at the same time. The function of the contact springs for four cells remains that way. The cables must be soldered very carefully, otherwise a short circuit with a burning battery may occur. Be sure to observe the polarity, otherwise the LED technology smokes off: Minus is on top plus left. 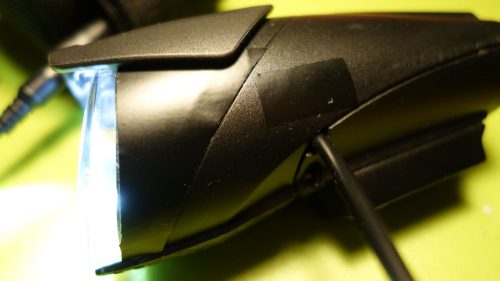 For the cable outlet, a small hole was cut into the battery cover with a round file. The cable is thereby easily clamped and secures the solder joints against tensile load. If you open the battery cover, the cable can be rolled up even transported inside the lamp. This option becomes important when additionally soldering a second cable with a USB connector for a power bank. 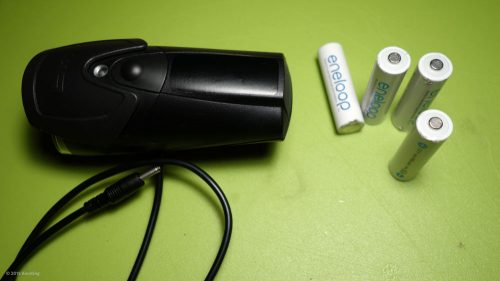 Thus, the cable not needed in each case can remain in the lamp. If both cables are led out, the original AA cells can be reinserted. Incidentally, the Ixon is feather-light without batteries! Whether you need all the connection options, everyone has to decide for themselves, for testing in everyday cycling everyday had the various configuration options initially a high utility for me.

To make it short: The conversion of the Ixon Premium together with the Ixon Speed ​​headlights and powered by the supplied 6 Volt NiMh battery with good 4.1 Ah gives a great headlight. For the first time, it is possible to use a light a little further than "a kind of glare-free high beam", while the other LED headlights illuminate the first 30 meters in front of the front wheel. Interestingly, I also found the opportunity to drive with both lights on the energy-saving level 1. In order to be well seen in the twilight in the morning in the winter traffic, the light with this double headlight is already more than sufficient. The surface of the light emission is naturally twice as large! I mounted the converted Ixon centered on the front fork with the specially available B & M Ixon Fork Holder, By the way, this also drastically reduces the risk of theft of the second Ixon lamp, since the lamp looks exactly like a permanently installed dynamo bicycle lamp.

But let's get to the exciting part: Are both Ixon LED lights now working on an inexpensive USB power bank?

The cable assembly for bicycle LED headlights on a power bank 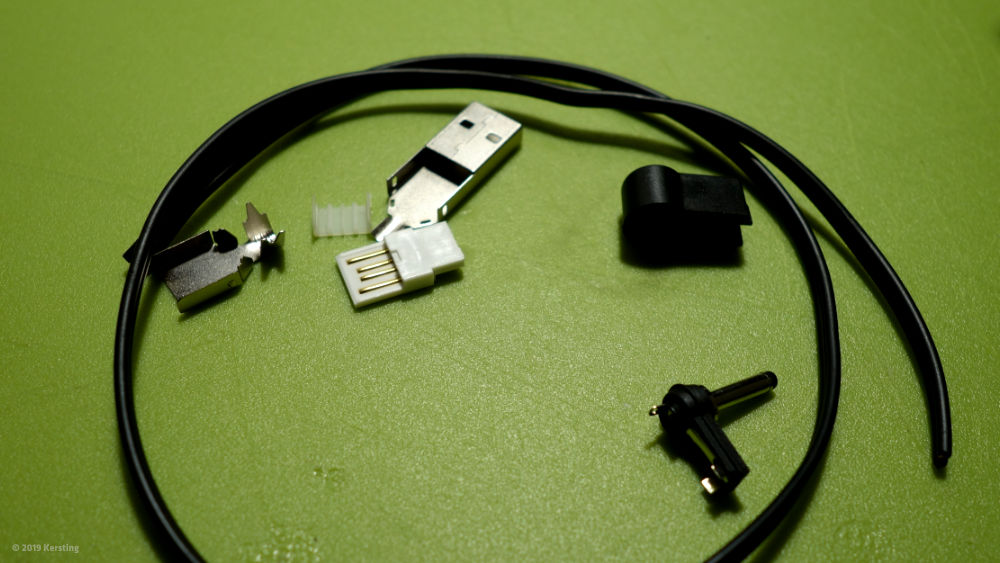 The photo shows the parts needed to connect the Ixon Speed ​​LED headlamp to a power bank via USB port. After a long search, I found all the components needed Völkner, In particular, the overlong jack plug was very difficult to find in the network. All other DIN connectors are too short for the Ixon IQ Speed! Due to the high current intensity when switching on the B & M LEDs, the thickest possible cable is needed, which can just be soldered to the USB connector without causing a short circuit on the metal housing. A normal USB cable 3.0 cable is not enough, but has a much too high resistance. I have felt in the cable thickness in several soldering tests always upwards. The thicker the cable, the brighter the lights! A thick 220 Volt power cable worked best - unfortunately, this is hardly possible with the filigree USB technology. The same cable specification I needed again for the above-described, soldered to the contact springs Ixon Premium lamp. As LiPo battery came one EasyAcc Power Bank with fabulous 15.000 mAh used. 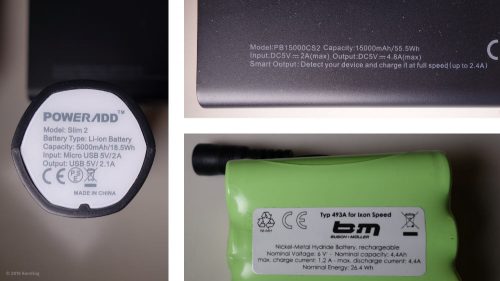 From 4,4 - 15A capacity, all three tested batteries work

Notice: A small power bank with only 2A also worked. 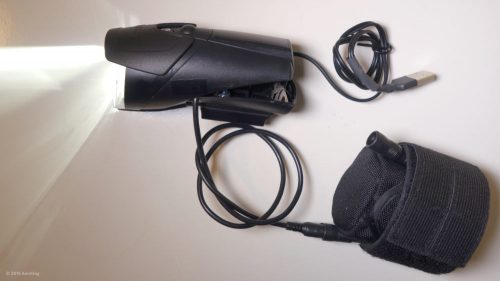 Result: Both performance levels of the older Ixon Premium work on the USB power bank. The newer and more expensive Ixon Speed ​​jumps for a moment, then immediately goes out again or darkly blaze in front of him. I also tried very short cable lengths of only 30 cm, no chance. B & M may have installed some circuitry that prohibits the use of a USB power bank. Too bad. Nevertheless, I book the craft experiment as a partial success for me, after all, I have now for more than eight icy winter hours double LED headlight with 170 Lux on my commuter wheel. 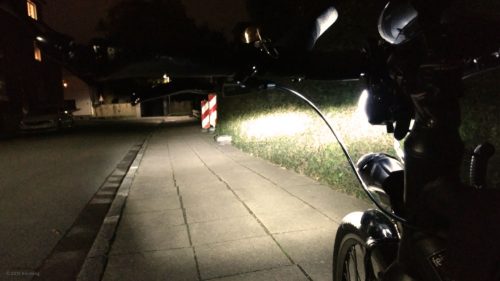 Nice light: Only two of three mounted Ixon headlamps are on in the photo. The top light is attached to a conventional handlebar mount, which I would not dismantle for reasons of nostalgia, since it has served me well for years. Of course, the self-soldered cable Ixon can also simply be plugged in there. Experience has shown that the highest point throws the best light on the road. 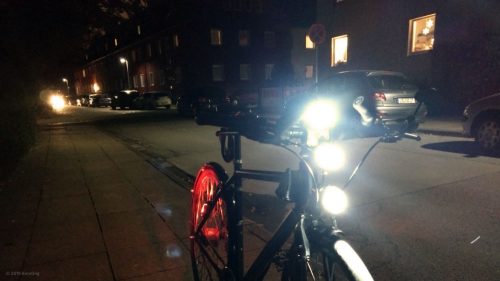 The whole thing again from the beginning: This is how it looks with three headlights. By the way, this constellation is not allowed by law. According to traffic regulations allowed to bicycles in Germany only a maximum of two approved headlights to be assembled. But that's enough now thick ... A dazzling in the truest sense of the word solution from China offers by the way the Thorfire BL02

How long the LiIon / LiPo batteries really last winter, I have not tested. As we know, the printing of capacity at China Power Banks is often very optimistic. Compared:

The original B & M battery produces the brightest light with the addition of 1,2 V. With him I can drive the new, power-licked Ixon Speed ​​and if necessary the Ixon Premium dazuschalten. I have used it many times in dark winter nights, the light of the two headlights is great. The constellation holds when I commute with me about 8h, in cool weather. The second headlight burned thereby approximately only half of the travel time. Annoying: You have to unplug the battery with each short purchase of both lights and take! A bag with zipper is therefore strongly advised.

The small USB powerbank has a little less capacity. Purely arithmetically, it might burn on the self-soldered Ixon Premium maybe 12 hours. If we subtract a third for what is likely to be a very optimistic China quote, a single LED headlamp will probably still burn for a considerable 8 hours. With the large power bank with two and a half times the capacity, it could possibly be 16-20 hours. Of course, only if the printed information is approximately correct.