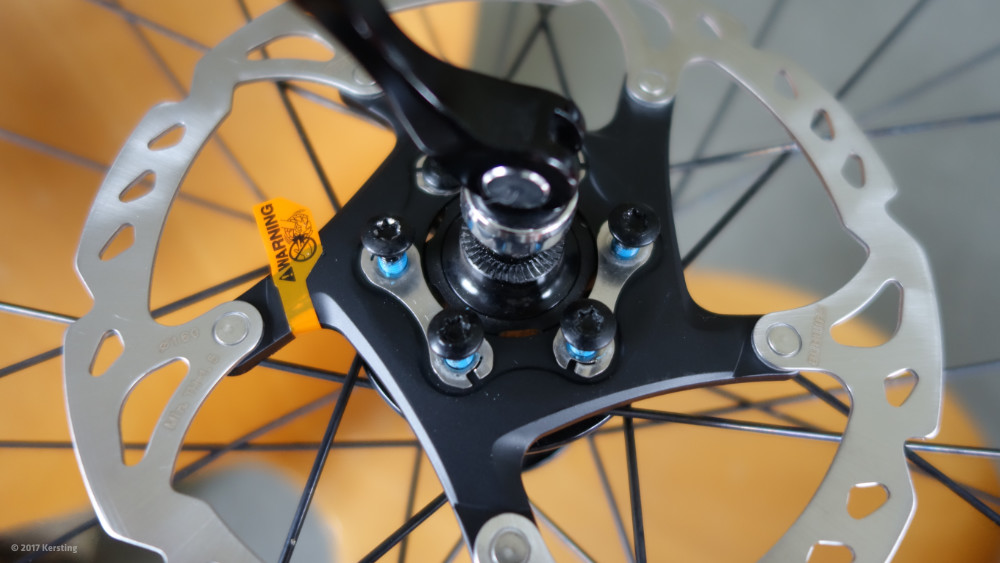 When converting a bicycle disc brake from plastic to metal brake pads, there are a few things to keep in mind

Even after two and a half years on my 2014er Stevens Cyclocross Vapor, the mechanical Shimano disc brakes with the organic brake pads (Shimano speech: "Resin") could not convince me. Although I had already exchanged the front Shimano pads for special cool-stop brake pads, the brake only worked reasonably well. Cold, she made ugly noises and rubbed in the form of violent vibrations. Compared to the Shimano original coverings, kept the Coolstop pads KS-D635 zigzag as long. And you did not have to already after 70 km of pure road operation (!) but maybe only after 700 km. Despite the better braking performance that was not a satisfactory solution for me. Mechanical disc brakes like my Shimano BR-CX77 are known for their teething problems. Nevertheless, I did not want to swap it for a completely new brake system right away. Because not only new calipers, but also new brake cables with longer inner cables have to be installed. At the Stevens Vapor This is because of the running in the frame brake cables then quickly a rather complicated conversion with uncertain output.

I was missing the current braking behavior:

So I decided to do that to convert to more powerful metal surfaces, But also the brake discs have to be changed. Unfortunately, my previous Shimano SM-RT56 brake discs only tolerate the softer resin-plastic pads: "Resin Pads only" is lasered into the cheap 10, - Euro brake discs. The compilation of suitable brake discs and pads on the Internet took time. For one thing, only a few bicycle online shops list which brakes are compatible with which discs and pads. On the other hand, Shimano likes to change the names of spare parts from year to year in order to fake a permanent "product evolution". This alone makes the search for spare parts extremely complicated, since the original parts are named after only two years.

Bicycle disc brake pads consist of one Carrier material and a friction lining. Thus, the carrier material may be made of titanium or steel or eg of aluminum. The denser the material of the support plate and the friction linings, the greater the unwanted heat emission directly to the brake piston. The actual brake pad is glued or riveted to the carrier plate and / or additionally glued and swaged. This consists of various components for different "braking disciplines" that typically occur during cycling, such as:

The mechanics of the disc brake must be designed to be as heat-resistant as possible. Overheated brakes sometimes fail, so do bicycles. Some brake pads can be cooled with additional "tuning compartments" in the wind. Due to the enlarged surface, they look like coolers in the wind, but they do not fit every disc brake type.

Far from all modern disc brakes: The good, old bicycle rim brake is basically nothing more than a big, mechanical disc brake with tiny brake pads. The rim itself wears in the function "as a brake disc" until it breaks through worn material eventually. This happens relatively often, but is often perceived by long-distance cyclists as a banal "fatigue" instead of wear. Almost all bicycle rims with rim brakes therefore have a pressed-in joint, which is braked - so visible from the outside - as an alarm sign for worn material applies. Disc brakes solve this problem by worn brake discs, which can be relatively easily and inexpensively replaced. But the single impeller must be constructed extremely stable. Otherwise, the spokes would tear off in a braked braking. 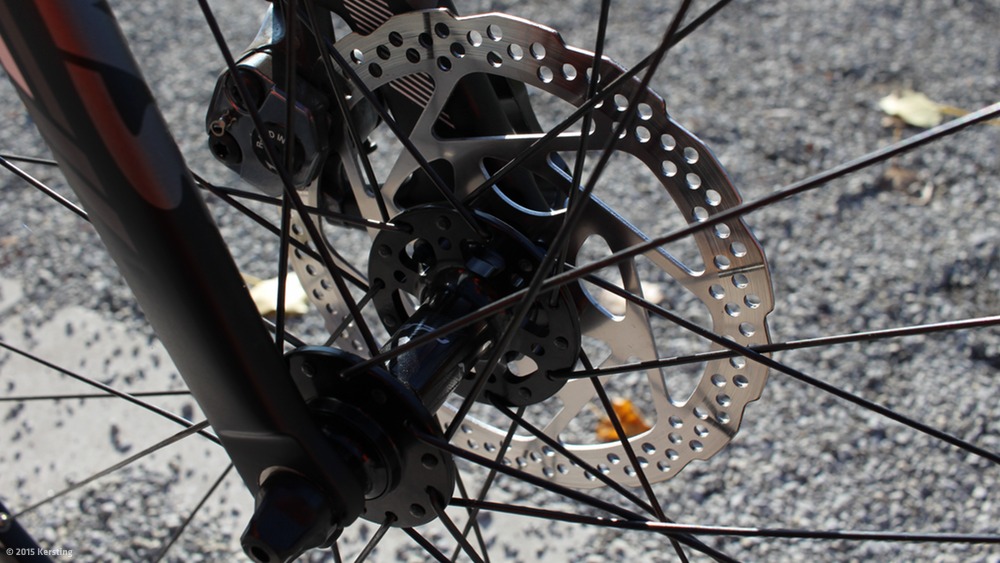 Organic brake pads consist of a mixture of glass, plastic, rubber, carbon, kevlar and binders as well as temperature-resistant synthetic resins that hold the component mix together. They usually make hardly any noise, give off little heat at the brake pistons, often have no exact pressure point and like to wear extremely fast. The brake disc itself lasts longer, but the pads must be adjusted very often in mechanical disc brakes. This is no longer necessary with hydraulic disc brakes, but the linings here often have to be completely replaced: Some cyclists report only a few hundred kilometers ... The low-cost brake discs for resin or organic brake pads almost never tolerate metal brake linings. They almost always have to be replaced by more expensive, more durable brake discs for sintered or metal brake pads. 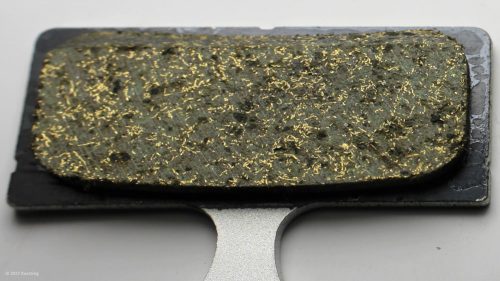 Also in organic brake pads metal particles can be included.
These are probably soft brass chips.

For this, the resin linings need only a short distance to be decelerated before they grab right. What many do not know: After slowing down organic deposits, a so-called "scorching" should be done. For example, when braking downhill, you brake intensively with a disc brake until a noticeable brake fade sets in (ie a declining braking power due to heat). Only then do the last plasticizers gass out of the linings - that is, the brake linings have retracted correctly after cooling down. Organic brake pads last longer. But you should always do this with only one disc brakebecause you still need the other brake to really standstill without risking head and neck.

Sintered surfaces are made of hot pressed materials, which in the heat in the oven quasi "cakes" as a cake together. They are stronger than organic deposits and can withstand more heat. The granulate of the materials differs from manufacturer to manufacturer and is often top secret. These sintered pads are lower wear than organic (resin) disc brake pads for bicycles. They squeak less than pure metal brake pads and are more resistant to heat and wear than organic rubbers on long downhill runs. They are usually mounted in the original equipment mainly in Japan and the USA and are a good compromise between longevity and achieved braking effect.

Metal brake pads for bicycles consist - as in motor vehicles for the most part of metal, gray cast iron, graphite, brass or copper, which are glued with binders and hot pressed (previously also asbestos and lead). The advantages of metallic coverings are a very high heat resistance, for example, downhill, a high wear resistance similar to car brake pads even in the field, but a tendency to squeak and a higher brake disc wear. The bike becomes more dirty when braking due to the fine metal particles and the brake dust from metal particles. The brakes are but powerful, durable and must be adjusted (with mechanical disc brakes) less often. They are clearly audible and require a long braking time until they develop their full braking power. Incidentally, the term "titanium brake pads" in Shimano refers only to the titanium carrier plate - not to the material of the brake pads. 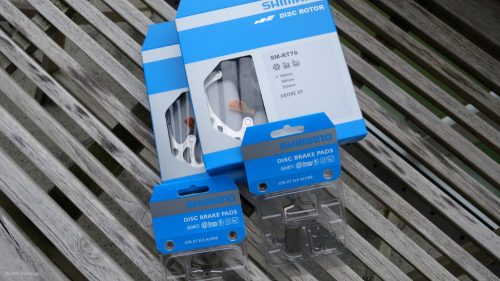 I chose Shimano metal-titanium rubbers G04TI and two brake discs Shimano SM-RT76 in 160 mm. There's a reason for that: The slightly more expensive SM-RT86 discs have an aluminum core with two thin steel walls. In the reviews, I read about this so-called "Ice-Tech" technology from Shimano Although, apart from a few molten specimens of mountainers work well, but that they wear out very quickly, because the steel layer simply slows down during operation. In addition to the pads, then all 1.500 km additionally the brake discs must be changed. 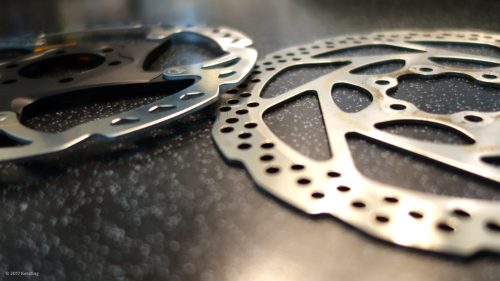 The complete Shimano brake kit (2 discs and 4 titanium pads) costs about 85, - EUR. When comparing the old and the new brake disc on the table, I got a shock at first: The old SM-RT56 brake disc was completely in one piece, The new brake disc is riveted to the hub mount and thus has an optical offset of about 6mm. However, this disappears again in a milled groove, which positively encloses the hub. You can not measure that properly, I just tried it during installation and it fits without having to put the calipers with bad tricks. 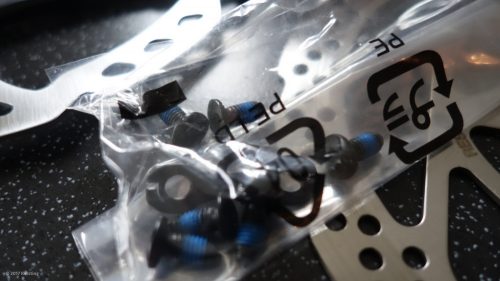 To the brake discs Shimano supplies suitable safety plates and screws with a blue screw lock. Both protect against unintentional release of the brake disc from the hub while driving. When fitting the new brake discs to a used bike it is important that the hub flange is really 100% clean. Only a few grains of sand can already let the disc light eggs. I have the brake discs before installing in the bike again degreased with brake cleanerso that no grease or oil comes through the assembly to the new brake pads. 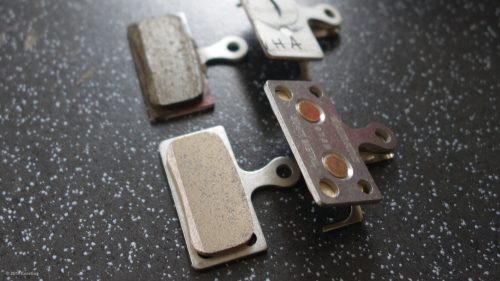 The metallic one Brake pads G04TI from Shimano consist of a titanium backing plate with a glued coating of a metal mixture. They are less sensitive to heat, have a higher coefficient of friction and last longer than organic brake pads made of plastic. Unfortunately, you have to retract them much longer and the noise metal on metal is naturally a bit louder than with plastic coverings. The old brake pads I have marked, if you want to install them again: front outside, front inside, back ... only then you have a chance after months nor the old set again "wear properly" to assemble. 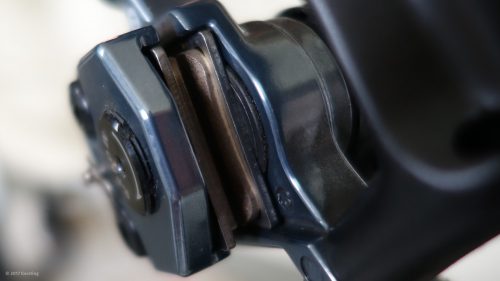 After cleaning the caliper I installed the new brake pads according to all the rules of the art. The front wheel with the optically offset, new brake disc fit into it. Then began the typical, meticulous setting of a mechanical disc brake: every half millimeter counts! A detailed Instructions for brake pad replacement are available here, Only after the first, successful test drive with the new front brake I have also rearranged the rear wheel and mounted in this action equal to a new chain, the fingers were already dirty.

The ready-made disc brake on my cyclocross bike 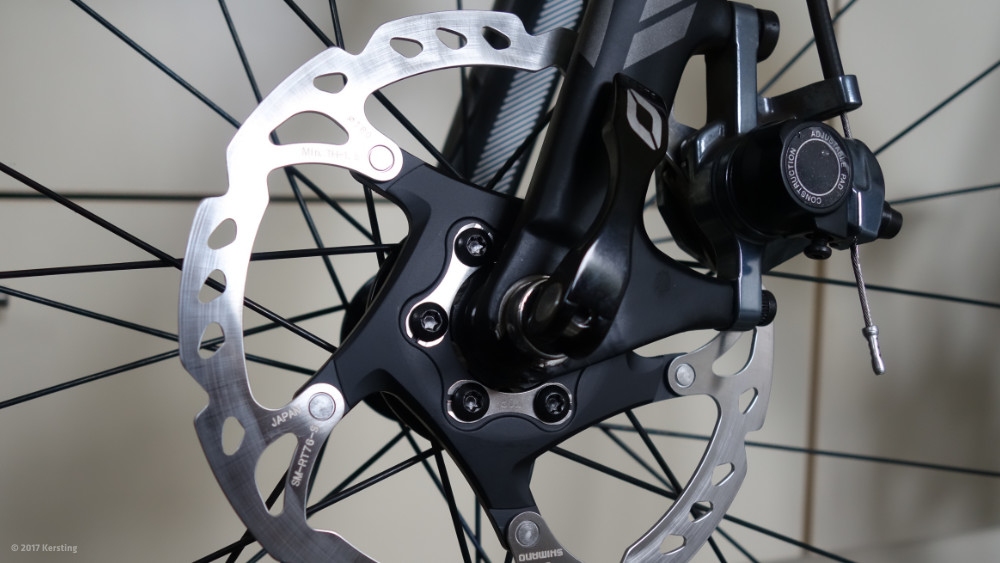 The new disc brake with the metal brake pads has not yet retracted in the photo.

Conclusion after the first test drive with metal brake pads

Incidentally, that was not all it took to improve mechanical disc brakes. The change to high-strength Bowden cables with pressure-resistant sheaths, eg from Jagwire, should also noticeably improve the braking effect. In addition, I theoretically could have mounted a 180 mm large brake disc on the front wheel by mounting the brake caliper with an adapter. But the fork and the frame must be released by the manufacturer. This was rejected by Stevens for my Cyclocross model Vapor on request but unfortunately, possibly because it is a carbon fork. With other bicycle manufacturers or models, however, a release on larger disc brakes with adapter can be done, a request from the manufacturers is worthwhile.

Note: For the work described here on the brake system take no responsibility. Please consult a dealer if you are not familiar with bicycle brakes yourself.