Repair or change the headset 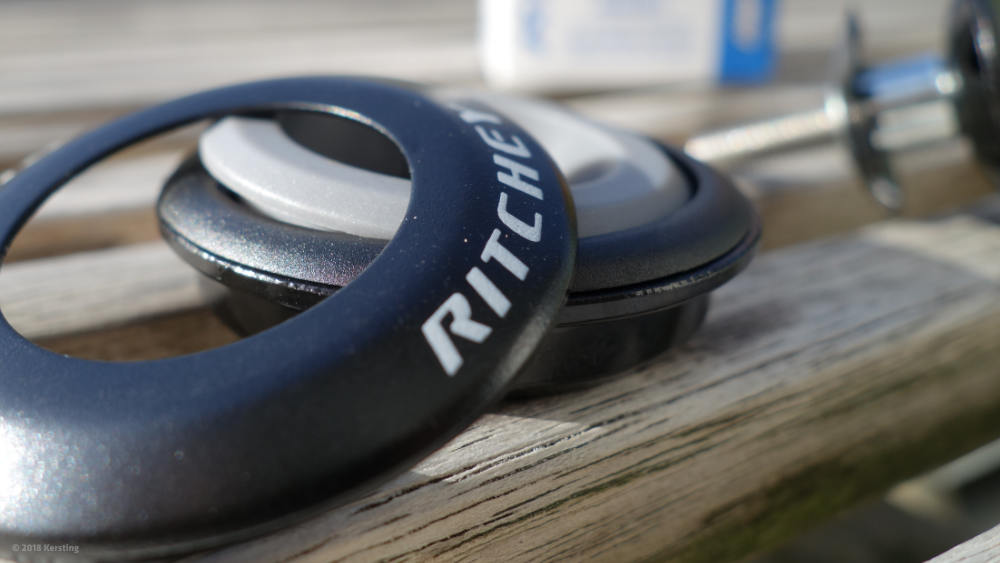 The headset on the bike can often be repaired before the complete replacement. For this purpose, the load points of the bearings are simply twisted installed and made feasible again.

NAfter 13 years of driving my headset was broken on the bike. The steering head bearing had a very slight stop during straight-ahead operation. At first, I thought the front tire of my Stevens Citiflyer had left, but even after the tire change, I could hardly drive freehand. A clear indication of a worn tax rate. The bike was uncomfortably nervous because of the minimal resting point - it did not want to drive any more curves through pure weight shifting. So probably a new steering head bearing was due. The search for parts in the network was very difficult, because I did not know the dimensions of the Ahead tax rate. The manufacturer Stevens could not call me the name after 13 years allegedly. To find out, the camp had to be expanded first. For newcomers: Basically, a distinction between thread and unthreaded tax rate. The Basic structure of a tax rate you can look very good in the Wikipedia, further information is there in the "Wikipedalia".

Disassembly of the tax rate is usually associated with special tools that I did not have. I thought to myself: The two worn roller bearings of the headset could perhaps measure even in the pressed state, if the front fork was removed. Then it would be possible both ball bearings:

so that the annoying stop point when driving straight away disappears. Because of the permanent load in this straight-ahead position, the steering head bearing is only occasionally worn out. To 90 degrees twisted the camp would have to work perfectly again, because the rest point would then be for normal cycling at a completely irrelevant point. The waiting time for a new tax rate is perfectly bridged. Sounds incredible? But actually it worked just as perfectly: A faltering steering head bearing can be saved by this trick actually over thousands of kilometers! 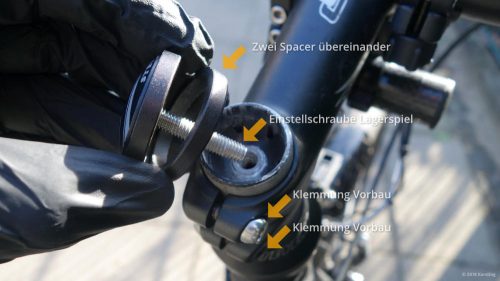 First, the Ahead stem is dismantled. For this purpose, two trivial Allen keys are sufficient. The Ahead construction is really ingenious: The bearing clearance is adjusted only by the slightly tightened clamping screw in the steerer tube, the stem and handlebar is clamped only with two screws and serves as a lock of the set bearing clearance. These are also to be solved. The height of the handlebar is adjusted via so-called spacers. With my bike in the lowest possible position. 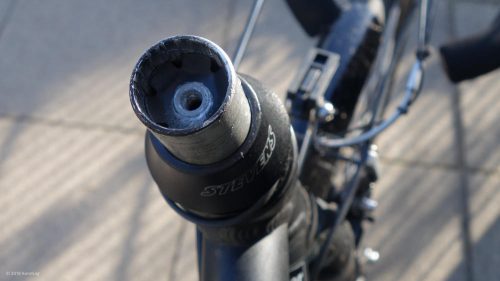 Now the entire handlebar together with the stem can be removed - beware, the fork falls out by itself down. All steering head bearing parts must be carefully placed in the correct order so that the assembly works without problems again. In addition to the firmly pressed bearings, there are aluminum and plastic rings, which must be installed exactly in the original position during assembly. The fork together with the front wheel and the handlebar can be stored carefully mounted with all Bowden cables. 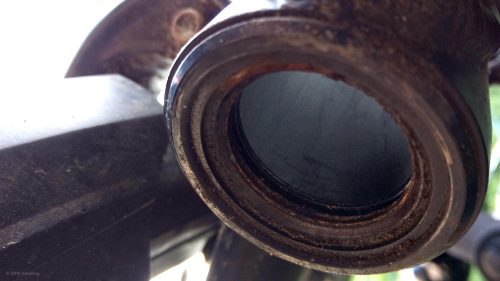 The lower steering head bearing looks badly corroded. In contrast to the upper ball bearing it turns unfortunately only stiff. I clean off the dirt and measure the bearings with a vernier caliper first. Since I have no suitable tool and with light blows is nothing to do, I leave the lower camp to sit, because I have no spare part, or need the wheel. The upper bearing is very easy. Measuring the size will be much easier. 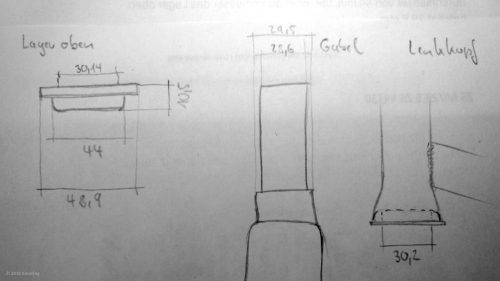 After that I will do a little sketch with the most important dimensions of the ahead tax rate. A specialist dealer can determine a suitable replacement tax rate on this basis. For cone or cartridge bearings, there are three bearing seats of different depths embedded in the frame: 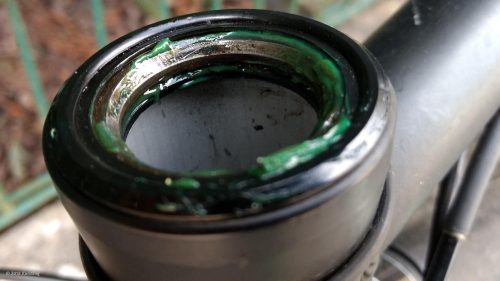 Both ball bearings, the steerer tube and all small parts are cleaned with brake cleaner. The lower bearing shows slight rust marks, I can not get it completely clean anymore. This is mainly due to the lack of mudguards in rain driving. High-quality bearing grease is massaged in both bearings. The lower bearing is still in the head tube ... here it is a bit fiddly, but goes. 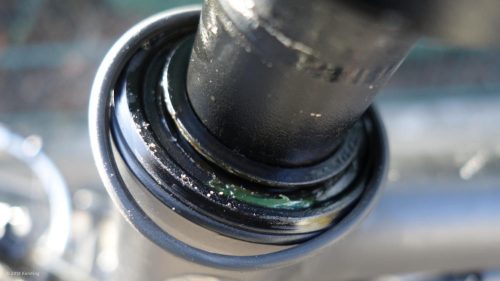 And now the trick: Above all, the bearings are only punctually loaded at the same points during straight-ahead operation. When the bearings are turned into the steerer tube by about 90 degrees, the loads will press at "new points" that are not yet worn or are not engaged. A thereby possibly emerging detent point with strong turned handlebar is no loss of comfort. It would have been optimal in my case, the lower bearing shell also to rotate by 90 degrees. But she is stuck.

Result of the repair without special tools

After the dust and clamping rings are again exactly in their old position, the steerer tube is again guided through the head tube. Winter riders now have the last chance to seal everything fat with grease, I personally will replace the camp with a new one before winter (see below) and for that reason are more economical with the dope.

After the bearing clearance on the clamping cover has been adjusted with the spacers and the stem clamp is tightened, the result is that the bearing is working perfectly again without a locking point. The bicycle handlebar turns easier. The wheel falls by pure weight transfer as if by itself in the curves. Finally, the proof of a successful repair for me: I can easily go back freehand with the old stock! Every bike mechanic I would have believed an exchange of the complete tax rate by new parts. The only question is, how long the old tax rate with these tricks now holds in everyday cycling. I needed about a good hour for the repair or stock maintenance.

Six months or 1.800 kilometers later, the steering head bearing is still fine. I did not even have to adjust it. The repair of the tax rate can really be proud of: Not just hubsBut old tax rates can be saved over thousands of kilometers. For some people that's the equivalent of several bicycle years ...

Install a new headset on the bike 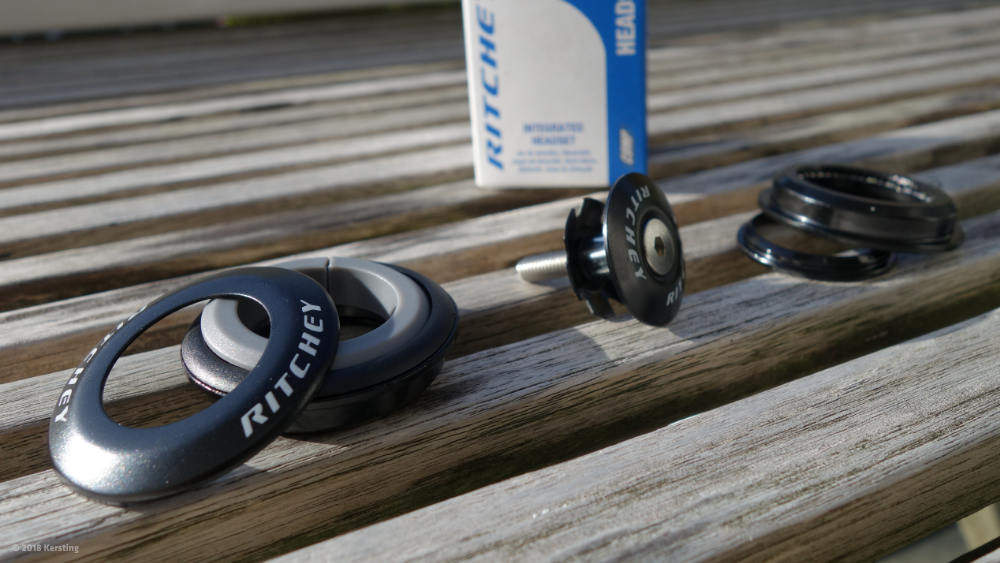 The complete steering head bearing as a spare parts package costs from the brand Ritchey just 25, - EUR. It was in the drawer for months until a colleague just before the weekend gave me the right special tool for a professional tax rate change. Since the old camp I repaired was still perfect on the bike, I was not very motivated. But the colleague, of course, wanted to see the lent tool in a timely manner. 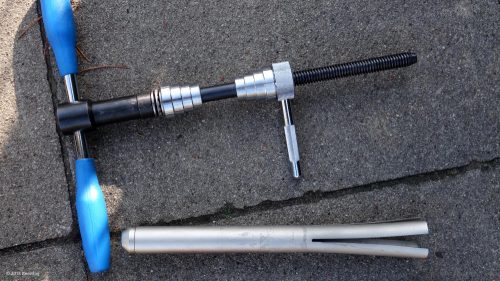 Professional tools for changing the tax rate: An expeller for the headset shells and a press tool to press the bearings as plan as possible in the head tube of the frame. With these tools, replacing an Ahead headset is a breeze and takes less than half an hour. Who wants to save the almost one hundred euros: It is in many cases certainly without these tools, for example, with a large vise and an old steel Stattelstange as an exporter. 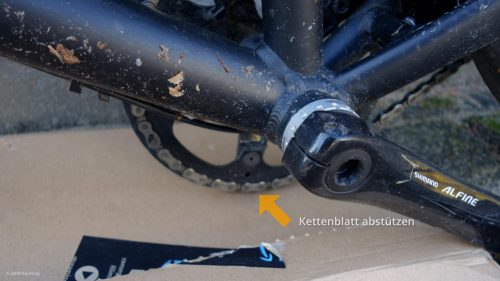 I also had to trick something: When knocking out the lower bearing shell, I supported the sprocket guard "softly" on a multi-ply corrugated cardboard instead of on a bare concrete slab. If a bearing shell is fixed, of course, the bicycle frame must be supported as far forward as possible on the head tube. But it worked for me as well. The cardboard not only protects against scratches and tooth loss, but also springs something when driving out. A rubber or a light mallet hammer is enough. Violent blows with a thick Motek I would avoid. 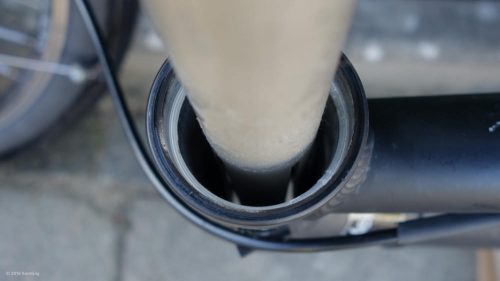 If a bearing shell can not be loosened, If you heat up the head tube with a (hot air) hair dryer and cool the bearing shell with ice or cold spray. Even a creeping oil overnight sometimes works wonders, especially with rusty steel frames. Instead of the expanding mandrel expeller, it also does a pipe as big as possible. If that's missing too, you'll need a big screwdriver or, if necessary, a chisel. As a result, the old camp says goodbye irretrievably in the eternal hunting grounds 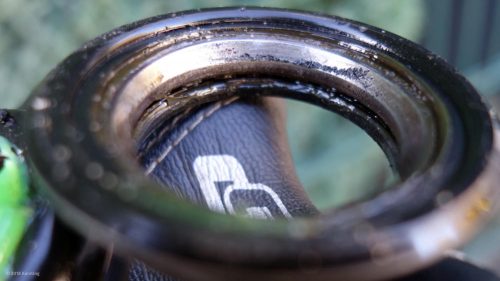 The lower head tube bearing repaired months ago: The fat has disappeared again and has turned back into brew rust slime. Nevertheless, it still worked and "rubbed" when manually turning only leicht.Nach the expansion with the professional expeller, I could have used it again. Now it will be replaced after 17.000 km with hard inflated tires by a new bearing set. 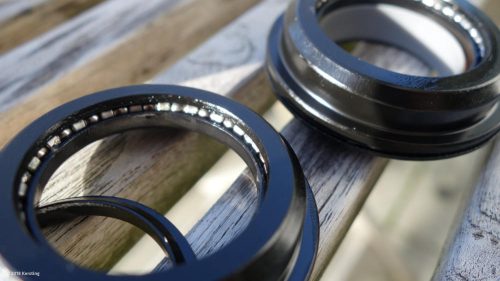 The new bearing set is already greased ex works. Personally, the amount of fat is applied too sparingly. In a few months, winter is upon us. 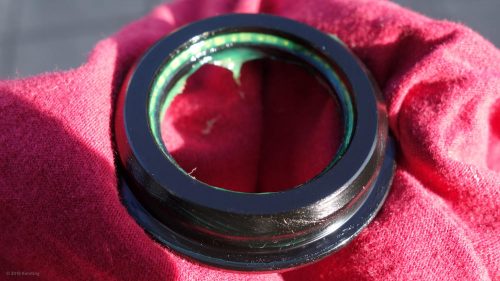 So the new cone bearings are also vigorously embalmed with grease. I even grease the flanks of both bearing shells on the outside, in order to facilitate pressing into the head tube as easily as possible. Grease also seals against water and helps to prevent corrosion. 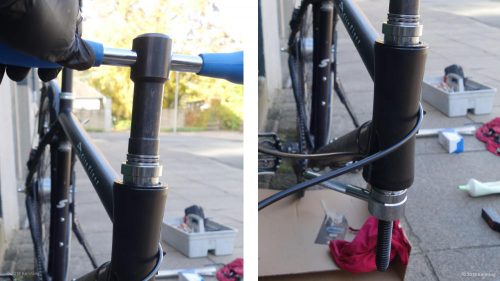 The press-fitting of the bearing shells is child's play with the ball-bearing press-fit tool. It takes little force, until the feeling of an absolutely tight fit arises. It is important that the bearing shells really sit perfectly flat in the head tube of the frame, otherwise punctual load peaks occur, which shorten the life of the bearings really drastically. When pressing with a vise or a large clamp, a helper is super-practical, holding the parts or the bike. 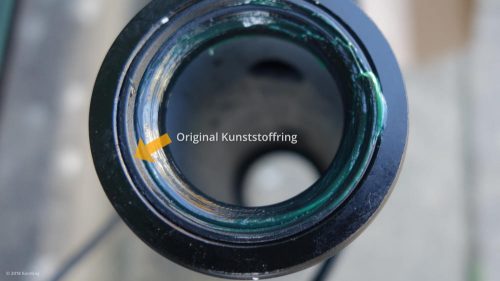 When assembling the steering head bearing Attention must be paid to the exact position, including the exact sequence of the parts. For the dust and clamping rings, I had to use the old standard Stevens parts again because the new ones did not fit well, or produced an 2 millimeter gap. That is why it is important to place the old parts piece by piece in the right position. They are partly needed again. 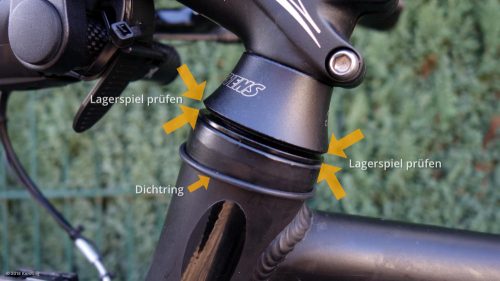 Check bearing clearance: The handlebar must be absolutely free of play, but still be easy to turn. The fork together with the front wheel must turn by gravity alone! The greatest resistance is generated by the Bowden cables. The tightening screw, which defines the bearing clearance, can really only be tightened very, very easily. For testing, place your index finger and thumb halfway around the steering head and halfway around the steerer tube, pull the front brake and jerk the bike back and forth. In the fingers absolutely no play can be felt. 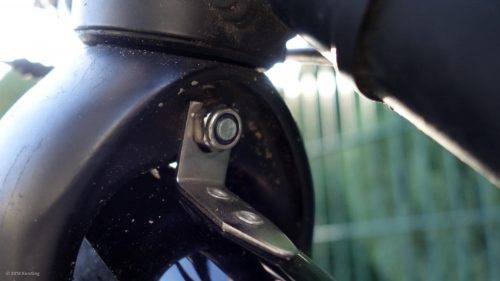 After over 40 apron-free years I mount this year for the first time again "Radschützer", in order to spare bearing, chain and my clothes. An apron keeps the spray from the headset. The first test drive may be quiet over a few curbs, wheelies or with sharp stunts, then the steering head bearing often has to be readjusted easily. Incidentally, the new headset turned out to be a second eye-catching experience for me as the driving characteristics have improved even further. It steers like the first day!

Conclusion after changing or repairing my tax rate