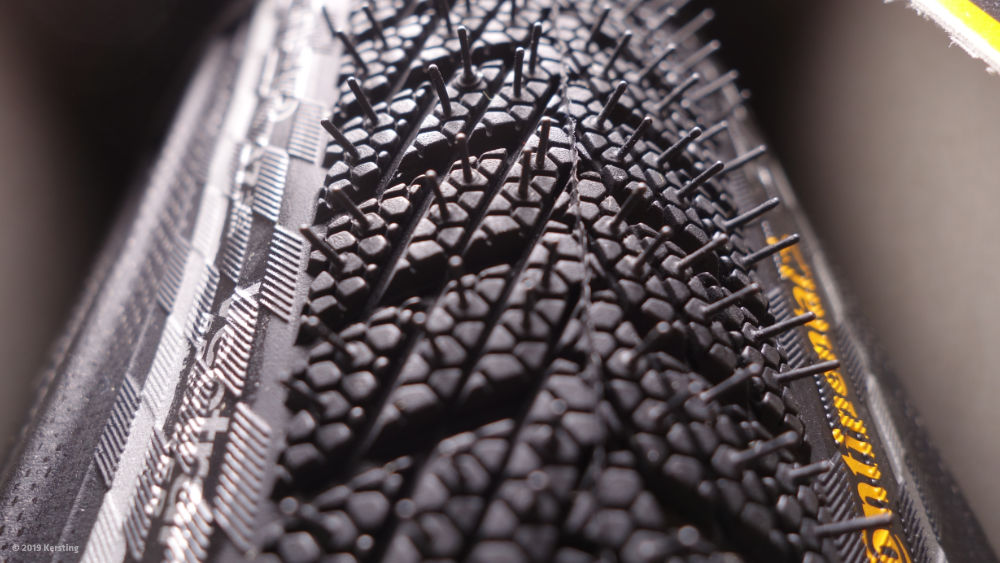 SWith 2013, I ride my commuter bike to work on my commuter bike in the cold season of the year and have had very good experiences in the months of December-March. My partner has been driving for years with Michelin Star-Grip all-weather tires in the winter. Every year there is the question of friends and colleagues, whether winter tires are worthwhile for cyclists. I'll ask: is it worth it for cars, buses and lorries, or is this just to stimulate the economy? The tests of our winter tires have become a real safety plus over time. Meanwhile, we are both convinced of the benefits and do not want to miss the winter tires just on the bike.

A car tire has about the footprint of one hand four wheels - a bicycle tire of a finger - but only two wheels. Two finger footprint are in my view rather thin ice, when it gets a bit slippery in winter. And if I cycle longer distances on my bike in winter, or commute in rush hour traffic then I want to do it as safely as possible. Because especially in winter lurk other challenges to cyclists:

But if you first brought up winter tires, it drives psychologically excellent on the right on the morning car traffic over! Detailed tips for that > Cycling in winter is available here 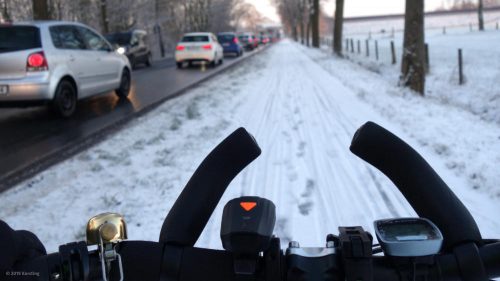 In winter by bike, just past the traffic jam

Because the motorized road traffic is in November and before Christmas in the permanent traffic jam, according to experience, the wheels angular. In addition, you have to try the bike at the first fresh snow at least times right? Because even in the cold season cycling makes great joy, at least if the clothes are right. As long as it is not really smooth on the roads, nothing speaks against the use in winter. The body stays trained and the soul is in a good mood. Even e-bikes combine the slightly heavier cycling with higher resistance with all the advantages including guaranteed parking during the Christmas season right in the inner cities.

The market for bicycle winter tires

The tire industry is still struggling in Germany with regard to bicycle winter tires, even 2019. Because in the production of bicycle tires, it only becomes lucrative for the mass production of companies. However, some manufacturers also produce genuine winter tires for bicycles for image reasons because they want to become or remain the market leader: 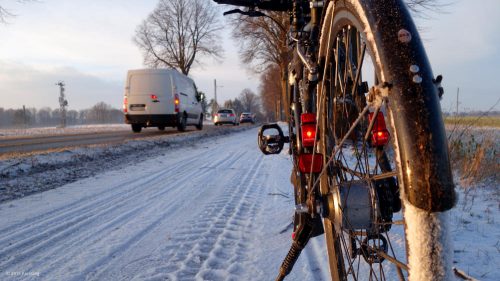 In my experience of the last winters through a smooth summer slick profile is not good at all in winter. Unfortunately, even a rough, open profile of MTBs does not bring the desired grip in the snow and not at all on wet autumn roads. Even rough off-road tires harden at lower temperatures and do not interlock well with smooth surfaces. In addition, rough profiles roll underground bad. If you live in the Ore Mountains, in the Sauerland or in the foothills of the Alps, it is certainly worth buying genuine spike tires for a frozen snowpack and icy surfaces that offer a certain degree of permafrost safety. Unfortunately, for people like me (Ostwestfälischer Flachlandtiroler) there is only one "real bike winter tire" without spikes that is seriously considered for commuters: the Continental TopContact Winter II Premium. I do not want to advertise Conti here, but this company is the only one who has come up with the idea to develop a winter tire suitable for everyday use, which is relatively light in weight and relatively easy to drive even on dry roads. This tire scores in addition to a softer rubber compound with thousands of tiny micro-blades. In addition, the tire design dispenses with raised shoulder lugs, which make the tire visually wider, but in the curve extremely braking. This bicycle winter tire has a classic, round cross-section, with which you can just put two typical on the bike sometimes right in the curve. On a frozen snowpack and in loose powder snow or slush, the tire really leaves an above-average impression. Controlled, speedy cycling in the snow or on a frozen snowpack makes it really fun. The tire reliably keeps its lane, we do not forcefully climb up the side in snowy roadway troughs, we like rough-grained tires that like to do, but simply follows predictable and faithful to the targeted line of the handlebars. A test for driving behavior in the snow after the new purchase of mine there is on Simantik.de.

Spike tires for the bike

All other manufacturers set equal to spikes, which are allowed in Germany on bicycles, but look totally cool, but unfortunately also bring a lot of disadvantages:

Their real advantage: they are unbeatable on ice and if they are smoothness. But personally, I do not ride a bike at black ice, even though I'm a two-wheeler nerd. It's just too dangerous in my opinion. A small slide in black ice can quickly break your cold bones. Therefore, I do not need spike tires, but normal winter tires like the car, with which one can also unwind 50 kilometers on dry roads, without having to accept all the disadvantages of a nail-tire with hardened metal pins. And the winter is long: From December to March I do not want to torment myself for four months with stiff pimple tires, but I still want to arrive safely, even if it gets a bit slippery. Here in Bielefeld, we have maybe five really white, snow-covered bike paths a year, five times it is really smooth on the roads (I drive then as already mentioned not with the bike). 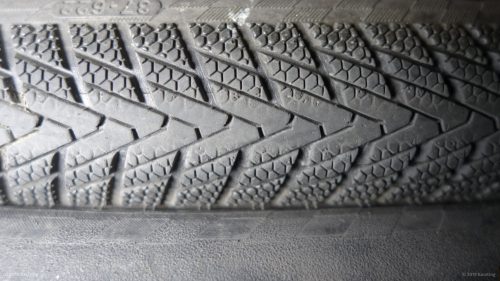 But at least thirty times it is really bitter cold, threatening freezing wet, sleet falls and transforms the rest of the autumn leaves in a slippery surface. For this reason, I drive winter tires without spikes, because they run easily and provide with their soft rubber compound just a lot of passive safety. I've been driving the Continental Top Contact Winter II in the sixth winter since 2013. The fine lamellar profile is even halfway passable even after this time. I would imagine that these tires also look good on e-bikes in winter: They are certified according to ECE-R75 norm up to 50km / h support. 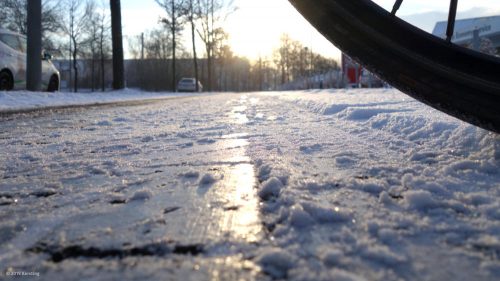 With ice, even a winter tire does not help much

Disadvantages of the Conti winter tire?

They are also available: There would be once the high purchase price of just 50, - Euro, which is outrageously almost on the level of tires. In new condition, thousands of tiny rubber nipples from the injection molding process, which grind on some bike on the mudguard and initially on the road produce a sub-optimal feeling until they are finally driven off after some time. This takes a long time, especially on the front wheel. Due to the higher profile negative portion, grit and split accumulate in the lamellas, which makes the tires heavier. 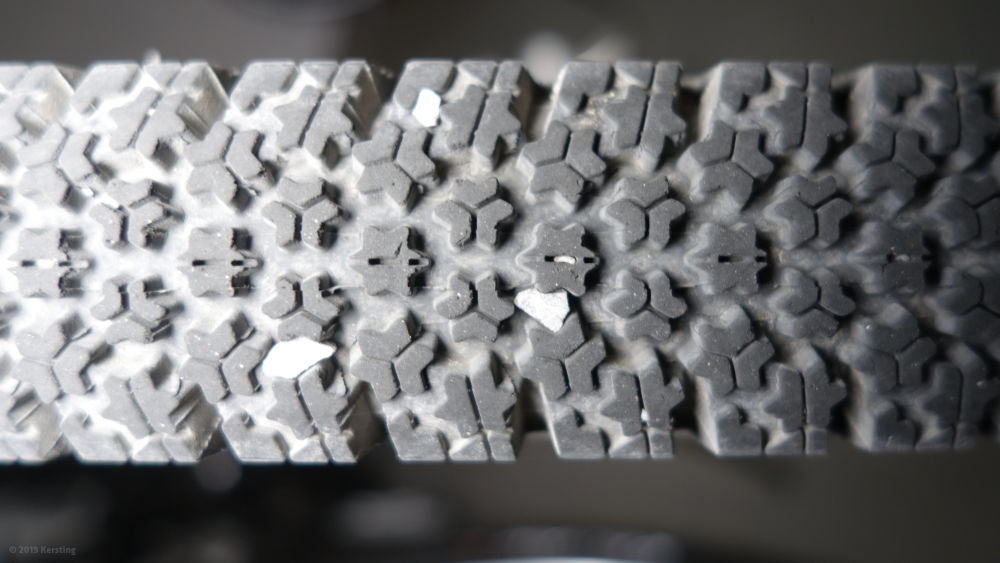 Michelin Stargrip after several, passed through winters. The profile is the perfect "pebble collector".

As a counterpart to the Conti winter tires, there are still quite wide failing all-season tires Michelin Stargrip, My partner has tested him for years in the winter and thus felt relatively safe in the cold season. But in contrast to the Conti Top Contact Winter II, the Michelin does not roll so easily, brings noticeably more weight on the scales and is just not a genuine winter tires, which can interlock with fine fins in the snow. But rather a "MS-tire" - so made for dirty ways. The open profile is happy to settle with tons of grit stones. Thanks to its relatively soft rubber compound and the low price, it is not the worst decision on cold days. Just in summer, the tire must therefore also very quickly back down from the rim! The term "all-season tires" does not quite apply to the Michelin Stargrip, even if the tread design reveals crystalline snowflakes. Verdict: A voluminous bad-road tire, which sets within its profile but nowhere real priorities.

Interesting for racing bikes and fast gravel bikes in winter is the Continental Grand Prix 4 Season, As a true offshoot of the legendary Grand Prix 4000S II (one of the best and puncture-proof everyday road tires - now replaced by the Grand Prix 5000 - but still available), he performs according to test reports, although hardly blunders, but is not a real winter tire due to the closed profile. At least not for snowy roads. But for wet and dry, dirt-strewn roads at low temperatures, the all-season tire is good enough: puncture resistance and the softer rubber compound are higher than 4000 and 5000er model.

Incidentally, this tire is also available in 32 mm width. He can also be driven well on cross and gravel bikes. This comfort and higher puncture protection is paid for with a slightly higher rolling resistance. Loud www.bicyclerollingresistance.com 4 Season requires 17.2 Watts treadle power instead of 12.2 Watts in the summer model Grand Prix 4000S II. But for comparison: The open-topped Continental Top Contact Winter II needs lush 28.5 watts and a profile-less, very light Schwalbe Kojak summer tire in still saturated 24.8 Watts. For fast helicopters, which are rather driven in better, but cold weather in winter, a thoroughly rewarding consideration. 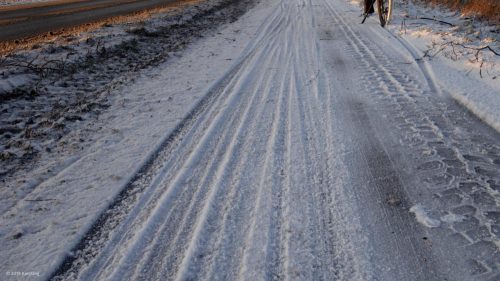 The change of the tires in autumn and spring makes me especially two bicycles at the same time no great fun. In spite of everything, in winter we clearly outweigh the advantages of passive safety - or simply "the good feeling". The "October to Easter rule" of the car is absolutely not the bike. My tip: tire replacement in winter with wheels only as late as possible and disassemble as quickly as possible in the spring. Because with summer tires, the wheel runs easier, because they roll better and are lighter. The rotating masses really count every gram. Therefore, light tires often offer the highest tuning potential on the bike.