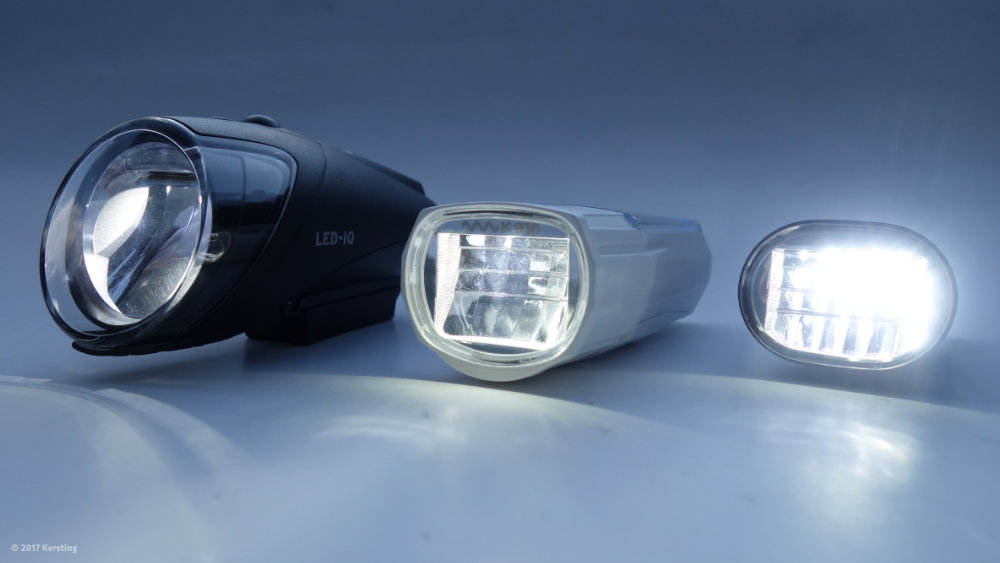 My starting position in late summer 2017: I would like to in the upcoming fall / winter season more light on the bike, especially to see more, It is still bright until the evening news, but the dark season is approaching and pulling off a few bright summer minutes every day. For me as a cyclist, there are two wishes from the last winter season, which I would like to fulfill this year:

Warmer thermal clothing and a brighter LED bicycle lights in front, The bike headlights have been almost acceptable in recent years, but it's not enough for me to come across cars with xenon burners or illegally installed LEDs. It should be just as bright as on the bike: A pious wish, because somewhere the energy must come from. From my side-runner dynamo light rather not, because as a bicycle commuter I am in the long run too strenuous.

For bicycle headlights, the requirements seem to contradict: 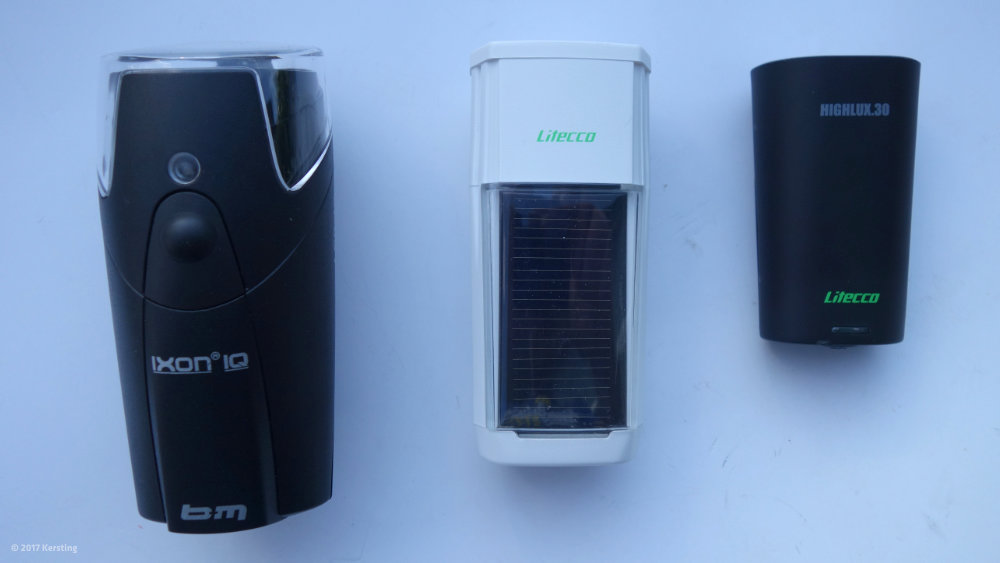 The headlamps from above: Left of the bush and Müller Ixon IQ with 40 Lux, in the middle Litecco Brillian solar headlights with 50 Lux, on the left the featherlight Highlux.30 with 30 Lux

I own one for three years Busch & Müller Ixon IQ plus an Ixon IQPremium version. It is almost the upscale golf class in the field of LED cordless headlights. I have never seen a Mercedes level in the field of bicycle lighting. The Ixon LED headlights are quite heavy with their exchangeable four mignon cells, but good as long as you do not drop them.

Do not pay attention and the Ixon IQ crashes into its hard plastic case on the floor. If you're lucky, it's just a small crack, if you're unlucky, all four rechargeable batteries in the dark roll under parked cars on the roadside, the battery cover breaks and the switch stops working. That happened to me several times. Actually, he drops me once a year. Is that stupidity? No, The clip is not exactly reliableYou have to control it every time you click it. With gloves in the winter that will be difficult. The charging socket is belowBefore the store you have to unclip the headlight and connect it to a special charger with a special cable. The lamp holder is not good for MTB trips with its high headlight weight. To charge you need a special charger. Despite all this is not a bad LED headlight. The design and the burn time of 3,5-4 hours at peak performance Almost ten years ago, it set standards in the field of bicycle headlamp technology, The remaining lighting duration is indicated by a permanently flashing LED.

Ixon IQ and Ixon IQ Premium look and are identical specified with 40 and 80 Lux, However, they differ significantly by a differently constructed reflector: The Ixon IQ produces a relatively narrow but bright spot beam with good illumination, the Ixon IQ Premium generates a much wider, but despite the 40 Lux more - not so bright light carpet. Unfortunately, the Ixon IQ Premium version is missing a really well-defined area. I prefer the simple 40 Lux version with dazzling oncoming traffic even better, because then you can still recognize the road. Both versions are in trade each with and without batteries or charger between 50 and 95, - EUR offered: compare prices so worth it. A version without batteries and charger makes no sense in my view, since the cells must then be taken out with each charge. 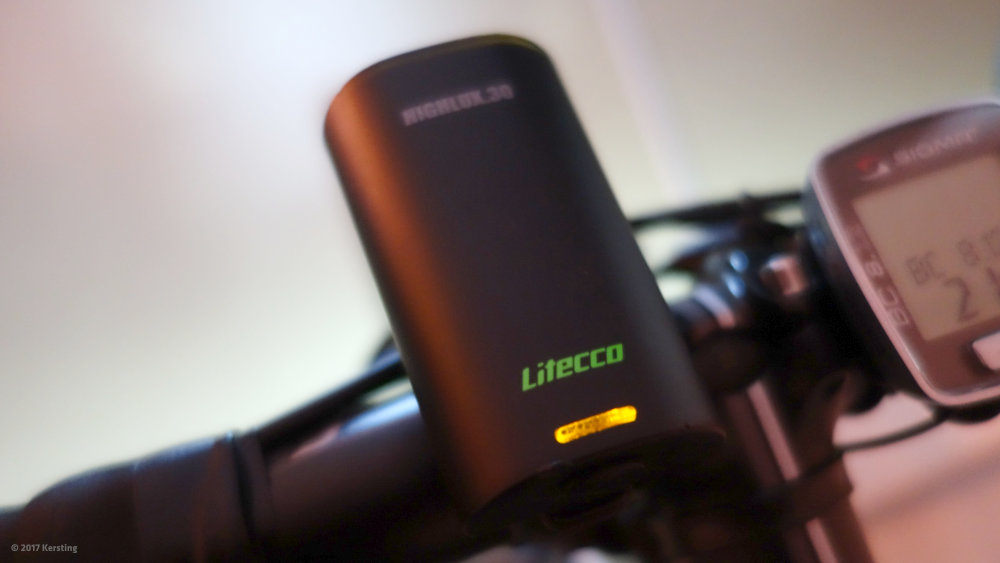 On my cyclocross road bike, the Ixon IQ was mounted only briefly, because he struggled with the hard-inflated tires and was too heavy for an 1.600, - Euro-wheel. I exchanged it for a small, ultra-light Litecco Highlux.30. While this headlamp will only deliver 30 Lux for a good two hours, it will weigh only unbeatable 55 grams, is small and has a small high-performance polymer battery with battery 1050mAh that you can load any USB interface. After about 90 minutes, a yellow indicator light and After about two and a half hours the luminosity goes to zero, The battery then has to be recharged eg to a notebook, the weaker one Economy mode lasts about four hours, In addition, the LED headlight he designed by his gentle trumpet form beautifully discreet. In contrast to the Ixon IQ, 20Lux does not have that much lower light, of course, but all the other features were exactly what I needed: a light road bike for a good two hours during the winter months, so that it can be seen clearly and appropriately. Once I fell on the small Litecco bicycle lamp while driving on the road. 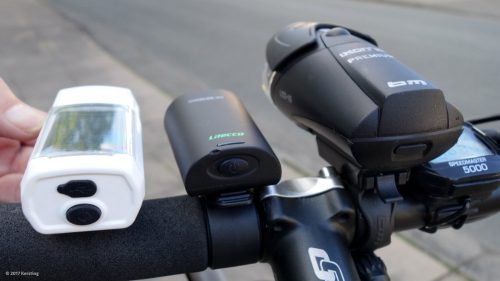 As if by a miracle, nothing happened except for a quirk in the case (see photo). This is certainly also due to its extreme ease. The supplied lamp holder (up to 30mm handlebar tube diameter) is secured with a thick rubber ring and keeps the headlight reasonably reliable in position. By the way, the small headlight can be amplified by a cheap additional battery - new German "Powerbank" via the USB interface. The Luminous time of 2-4 hours lengthened by a multiple. 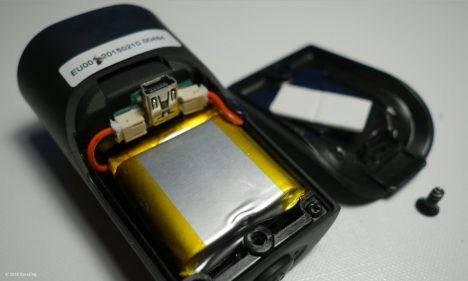 Of course, the extra battery must be attached to the bike somehow. The 30 LUX concentrate on a relatively narrow but homogeneously illuminated area with overall high luminosity for this small class. Fans of the wide road illumination are unfortunately disappointed: In the area for mountain bikes is the concentrated spot beam certainly not the right choice, except when every gram counts. On light racing bikes, this light is unbeatable. 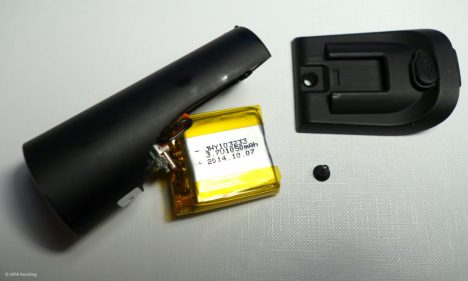 Is there criticism? Well, a mini USB socket today requires a very rare USB cable, the rubber jack of the jack is a bit fumbling advised and dissolves like. In some cases, there were problems with the waterproofness in heavy rain, according to Amazon reviews, the manufacturer shows up in interference but quite accommodating. Tip: The housing can be additionally sealed with silicone after being screwed on. If the lamp does not fit properly in the lock, it will slip off the handlebar when the button is pressed. If the locking mechanism were constructed the other way around, that would not happen. The light duration is just enough for the 1,5-hour training track in the winter during the day on the cyclocross. In heavy frost, the lamp shows its dark side: Through the small 1050 mAh battery, the extremely lightweight bicycle headlamp automatically switches from the bright level to the darker energy-saving mode. The LED then lights warning only faint orange. At zero degrees, the small battery is then suddenly exhausted after a few minutes. The headlight is an insider tip for athletic cyclists who pay attention to every grambut not for commuters who need sustained lighting with ample reserves. 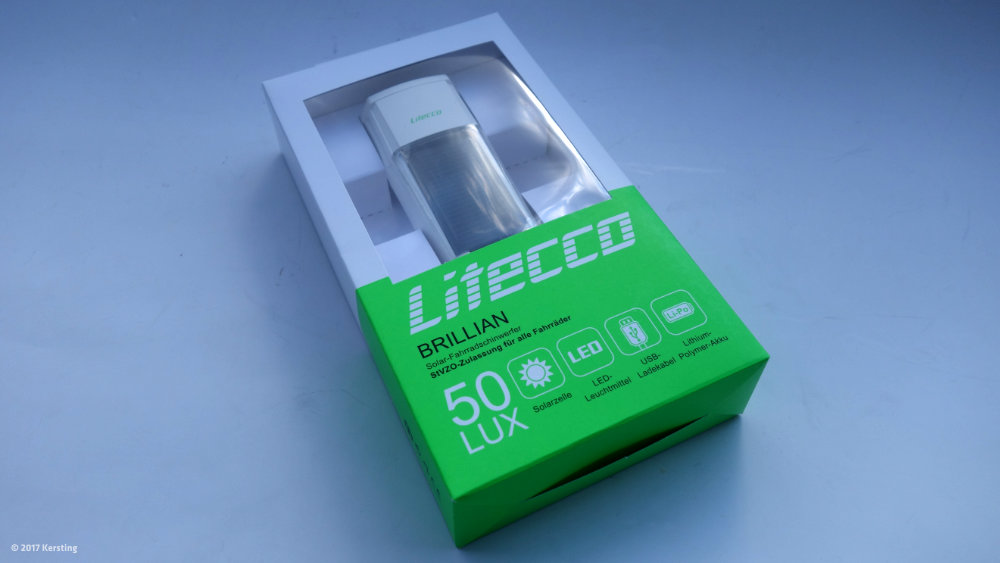 Note: The Brillian Solar Bicycle Headlight was provided to me by Litecco for testing purposes. This does not affect my assessment.

The desire for brighter, lighter and less complicated light thus remained with me for everyday life. So I decided due to the good experiences with the little one Litecco the larger Litecco Brillian model with 50 Lux try. This bicycle headlamp has a special feature: The housing contains a solar cell, with which the battery can be recharged in good light during the day. Thanks to the lithium-polymer battery, this headlamp with 120 grams is also pleasantly light and compact. The battery can be changed even if it is worn. 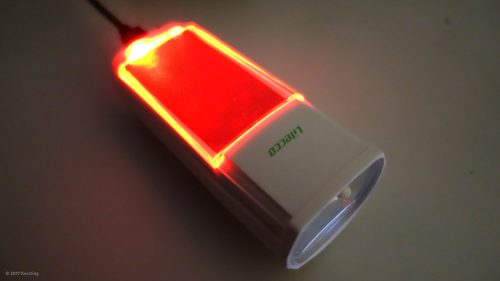 Litecco Brillian: The solar cell lights up red when charging

He fits the need just in his pocket. During nighttime handling, I have repeatedly confused the USB charging cable and the switch on the rear housing. Both are oval and made of rubber. The lighting time is according to the manufacturer three hours in the light and six hours in the economy mode. The LiPo battery has 2400mAh. It can be bought and exchanged environmentally friendly by the manufacturer. Connecting a spare battery works here as well. 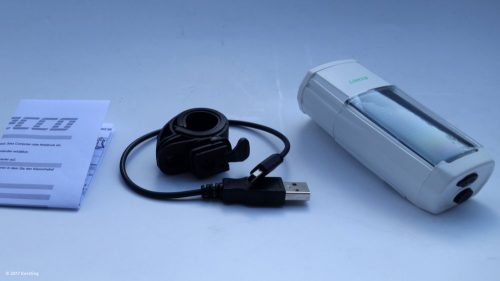 Package contents of the Brillan headlamp

The bracket is screwed in contrast to the Litecco Highlux.30 and not clamped. Two rubber spacers for different steering tube diameters (bracket 22-28mm) are enclosed with the battery. Fortunately, the Highlux.30 also fits in the holder, The lights can therefore be exchanged on one or more bicycles. Depending on the purpose, I personally make use of it as a bicycle fan. tip: The screw clamp gives even the smaller Highlux model a bombproof seat. Fortunately, both brackets can be purchased separately from the manufacturer for almost 4, - Euro. 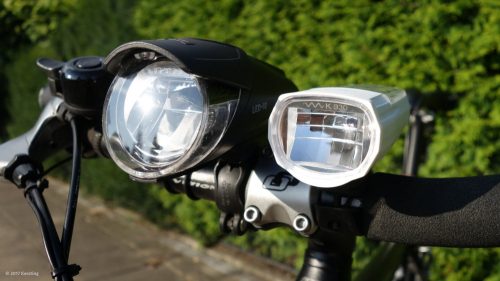 Ixon IQ and Brillan mounted on the bike

Unlike the smaller Highlux.30 model, the Brillan headlight shines with 20 Lux more in use also noticeably brighter. The LED light throws a similarly narrow, but continuous light profile on the road. The distance view is pretty good. My guess is that the same or very similar reflector geometry as the smaller Litecco light is used. At the first use, I can not yet give any details about the burning time or the function of the solar cell. When charging, the solar panel glows red, after turning on the lamp it illuminates the cyclist in magical blue. If the remaining illumination time of 30 minutes is undershot, the indicator light turns yellow.

On request to the manufacturer for solar function, I got the following answer:

"The solar panel charges in 8 hours for 1 to 2 hours of burn time, depending on the brightness mode. More is technically not feasible at the moment. ... Generally, most night rides by bike take no longer than one hour. Since the solar panel is constantly recharging in the open air during the day (or on the windowsill), the Brillian rarely has to be recharged via USB under most conditions of use. " 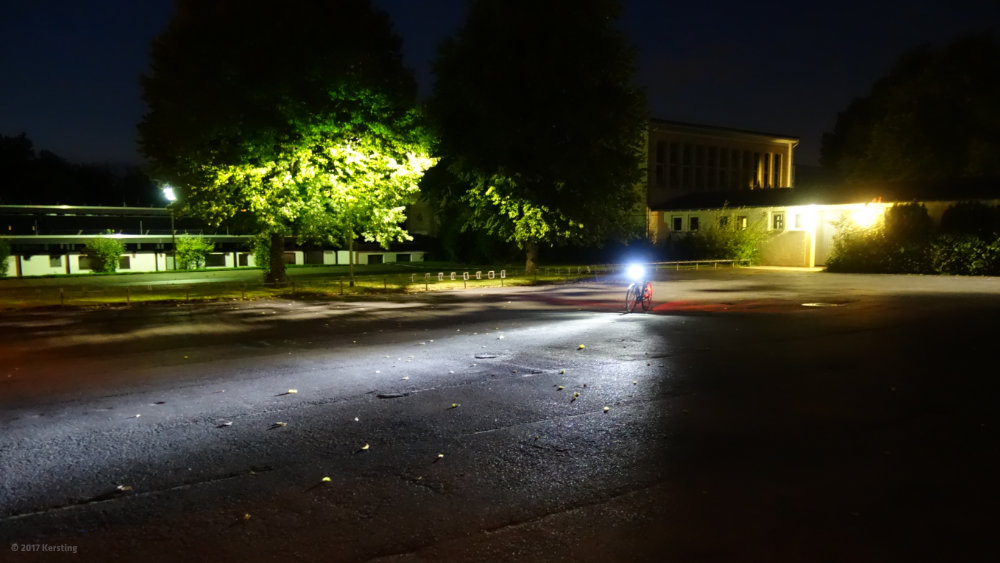 Light test of the LED rechargeable battery lights at night

Where there is a lot of light is also a lot of shade, but I have to say: In recent years, the bicycle headlights have improved significantly. Ideally, two LED headlamps are needed in parallel for optimal headlight illumination on the wheel: one with a wide illumination and one with a brightly defined beam. I will try this combination in the coming months on dark roads. Optimal is eg the combination of the Ixon IQ Premium with the bright Litecco Brillan together. Being able to charge the bicycle headlight simply via USB is very convenient. Of course, that should work with a standard mobile phone charger with a standard micro USB plug as well. Because they are everywhere, as formerly batteries. The specified lighting duration shrinks in colder winter temperatures in my experience considerably together.

We are unfortunately also 2017 still away from a theft-proof, fully rechargeable bicycle lights with two-stage switch on the handlebar grip. I want the same comfort as the motorcycle or the modern e-bikes. 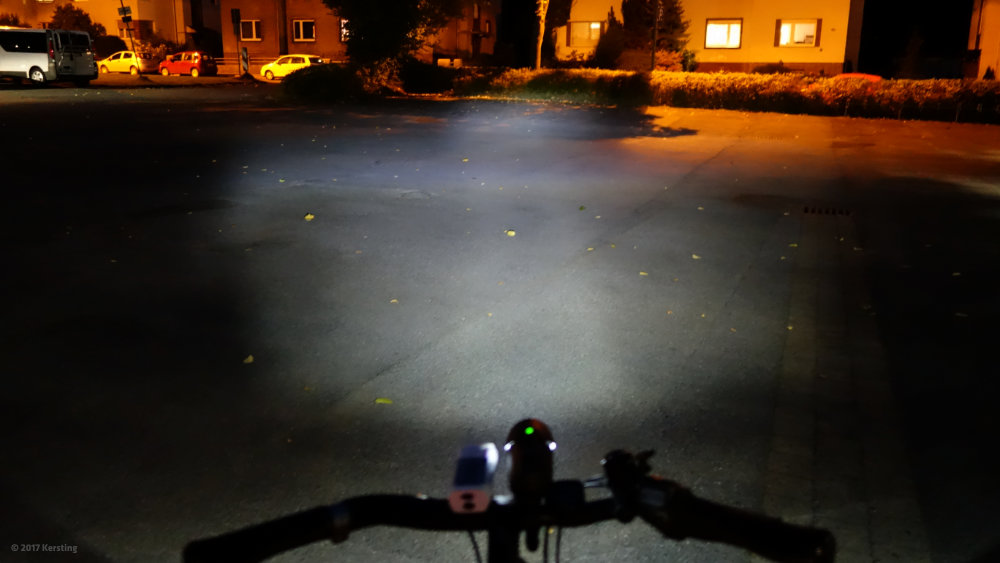 The bush and miller Ixon IQ Premium Headlight scores with its wide illumination. The specified 80 Lux may I at least doubt my model at least very carefully. 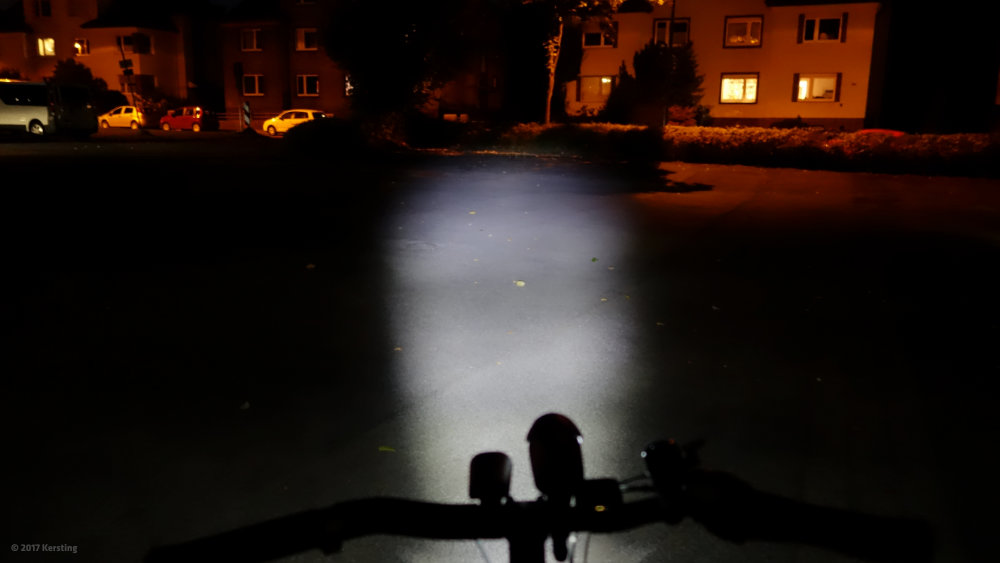 The tasty Litecco Highlux.30 has a narrow but bright 30 Lux illumination with low weight and small size. 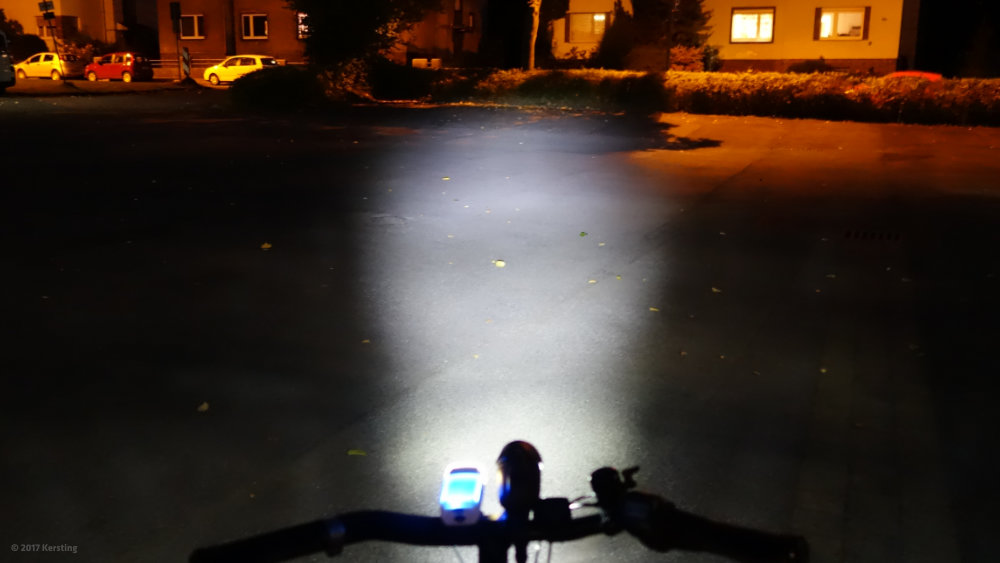 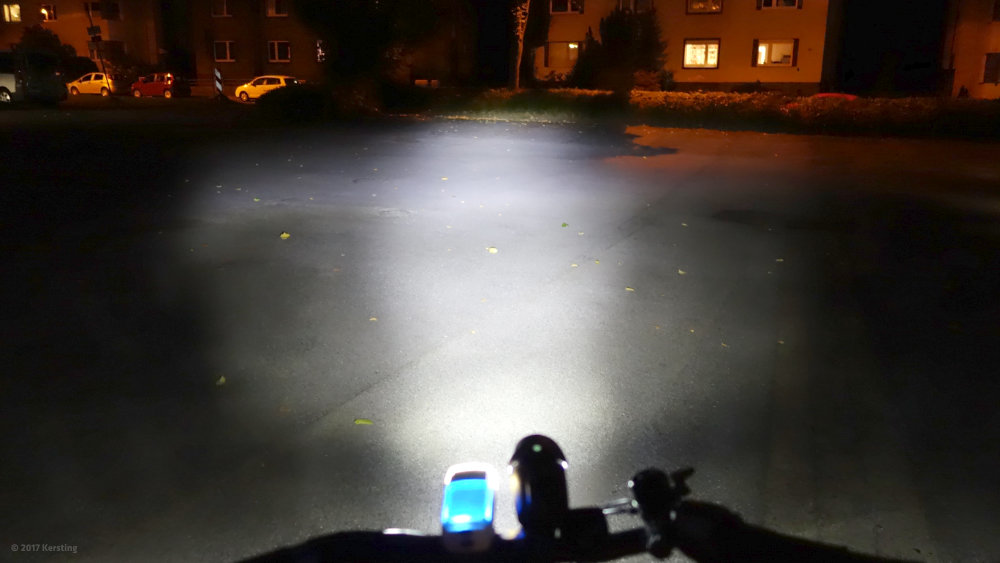 Litecco Brillian and Ixon IQ create a really good light together in parallel operation, I will try it out in everyday life in the future.