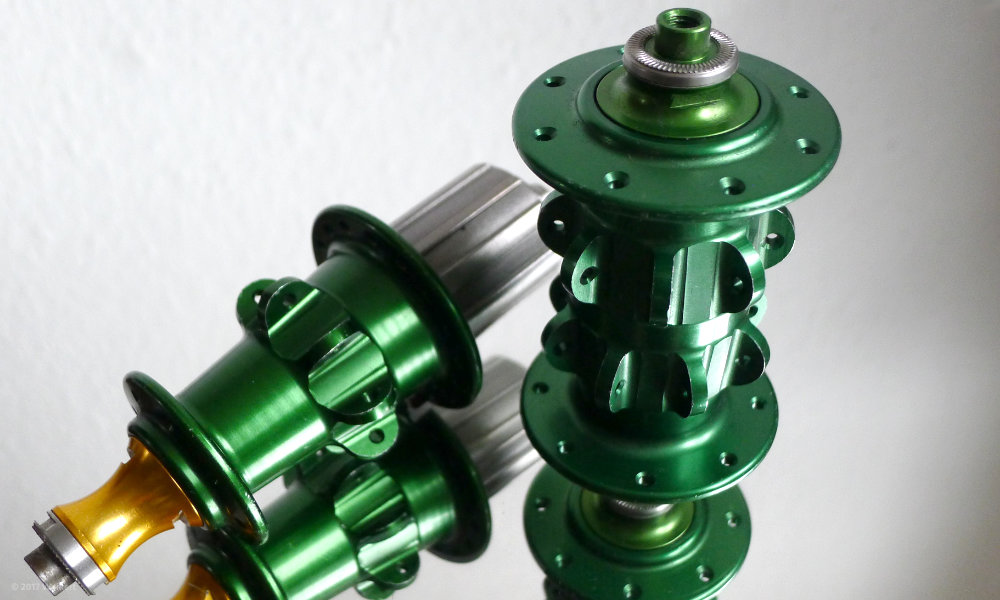 Whether it's the Yeti C-26, Cucamonga Flite Control or Westpine Neutron - in mountain bike history, "unicorns" - parts that are very rare, few that have ever been held in their hands, and most of them just come out Catalogs, photos or narrations.

The reasons for the rarity of these parts can be complex. Either an exorbitant (new) price is responsible for it, sometimes the partly adventurous constructed parts were not up to MTB use, or in times of the pre-internet era, the brand simply could not reach the broad market. On the Clark Kent Pineapple hubs probably meets each of the three reasons mentioned. Reason enough to take a closer look at these interesting Classic MTB hubs.

Everyone will think of the name "Clark Kent" directly to the old ego of Superman and suspect that this is a loan, but in fact the name refers to the surnames of the two founders, Pat Clark and Dean Kent - but certainly not without completely ignoring the Superman style. The company is said to have been based in Denver, Colorado.

Clark Kent has extraordinary bicycle hubs whose chronology is not entirely clear. It also appears that immediately after the demise of Clark Kent, production of some types of hubs was continued by Royal Bicycle Works (RBW). This is evident from the bike workshops of the years 1994 and 1995. For the first time in Germany were presented the Clark Kent XLR8 hubs at the IFMA 1994 in Cologne. There, especially learn the "Pineapple hubs" due to its unusual design with four hub flanges attention. But also the other models are due to the oversized "oversized" midsection much attention.

The screw hub is probably the oldest and most unspectacular of the Clark Kent hubs. The special feature of this hub is one Titanium sleeve, which connects the two hub flanges together. The connection is glued - as practiced by Nuke Proof, Tune or other manufacturers at that time. Due to the Schraubratz recording is to assume that this is one of the first Clark Kent hubs. 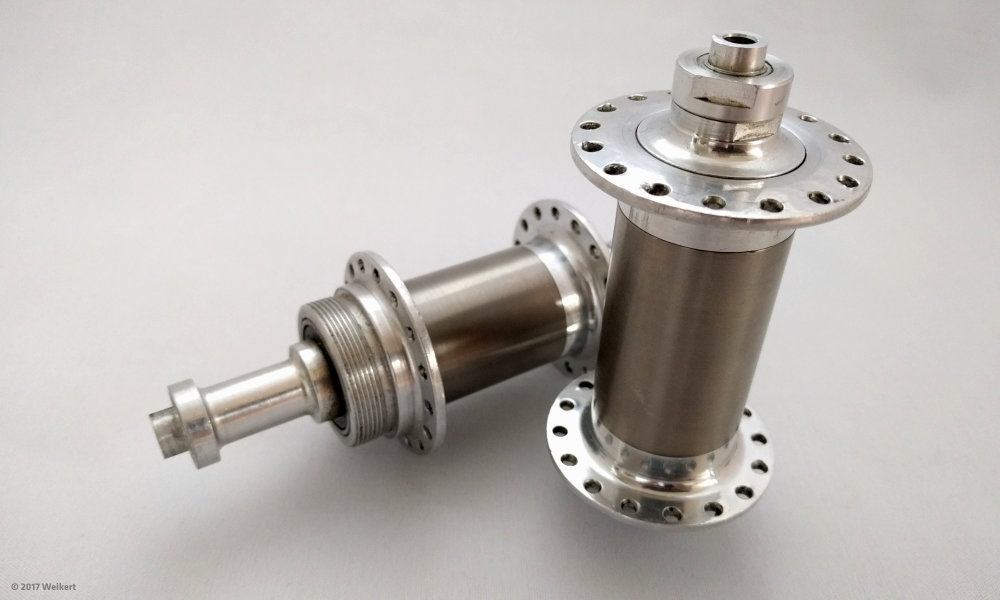 These hubs stand out in the first place by their unusual freewheel body from the crowd. The freewheel works with 3 pawls and is an in-house development. Shimano cassettes are natural. While Shimano freewheels are being screwed This freewheel is fixed by means of snap rings on the axle, The freewheel is made of titanium, and later of steel. It is unclear whether these hubs were produced at the same time, before or after the "Pineapple". There is no doubt about the origin. The hubs had a black, glued C • K lettering. These stickers were not particularly resistant, made a dandy impression and dropped off pretty quickly. In addition, there is also the complete "Clark Kent" lettering, in the rear hub, circulating axially stuck at the front hub (see Bike Sport News Parts Catalog 1994, S.148). The black lettering is not CI compliant with the succinct red lettering of later frames, so these hubs are probably dated ahead of the pineapple. 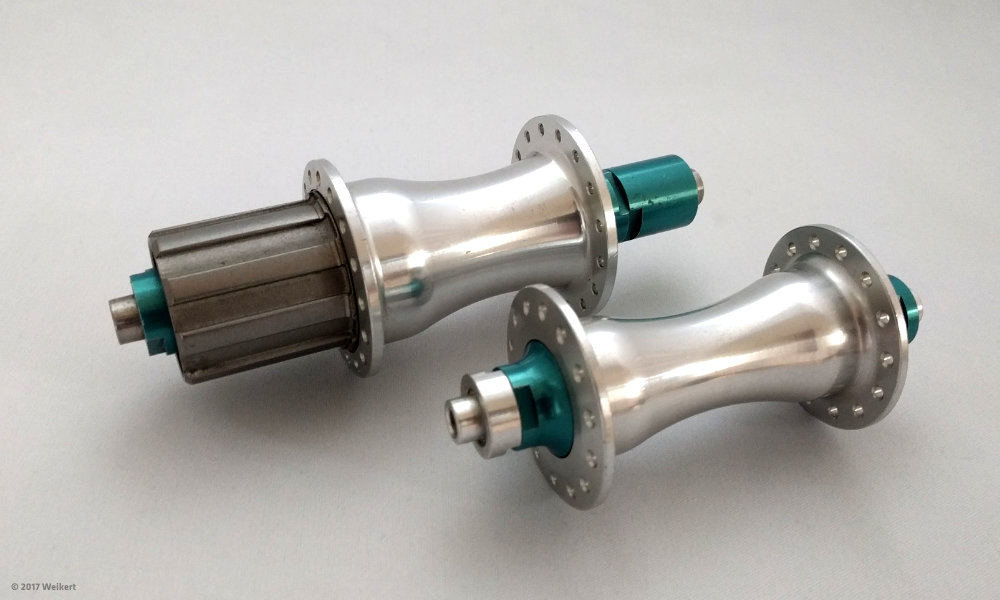 The front hub came 1994 under the label Clark Kent XLR8 on the market and was later distributed for a short time under the label RBW (Royal Bicycle Works). Due to the four hub flanges, the hub reminds a little of a pineapple, resulting in the epithet "Pineapple Hub" resulted. There are numerous possibilities and speculation about the spanking. It is possible to load the inner flanges with straight straight-pull spokes, while the outer ones can be spoked with normal spokes. Also, the flanges can be treated almost independently, with different Einspeichmustern. The provided by the manufacturer spitting looks, however an 2-fold intersection before, wherein the respective outer hub flange with the adjacent Pineapple flange is twisted (rooting / Snowflake). In this way increases the area on which the side forces are distributed, which should have a higher lateral stability. Due to different flange heights, spokes of identical length are to be used. 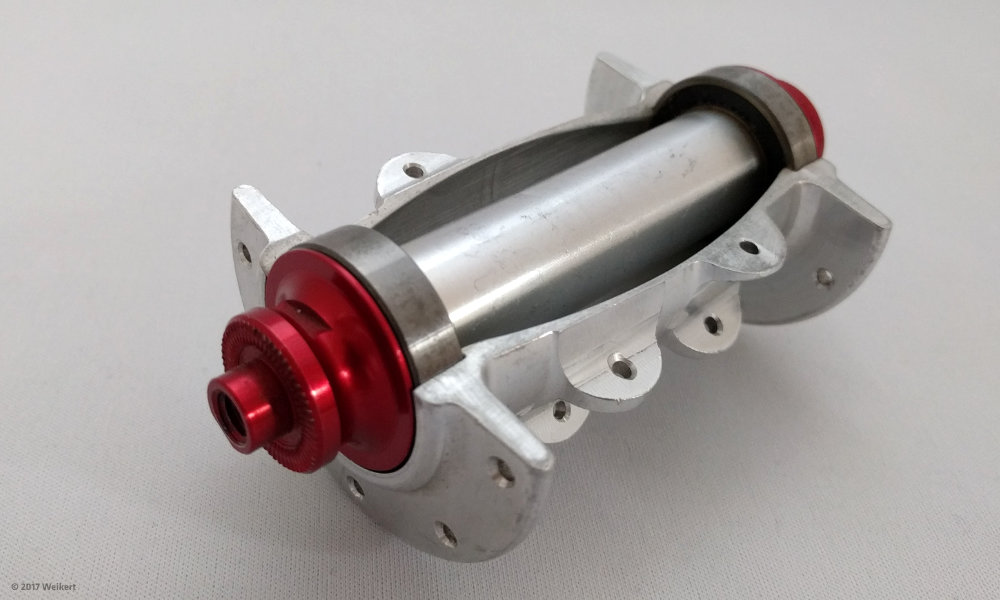 The bearing of the hub is not made of cone bearings, There are easily installed industrial bearings installed, one each per page. To disassemble the spacers are rotated by means of a cone wrench counterclockwise against each other. A conical key holder is milled into the spacers. The spacers are screwed into an aluminum sleeve, which forms the inner axis of the hub. The spacers also serve to hold the bearings in place. Inside, the spacers have a thread, allowing them clamped with quick-releases or bolted directly can be.

The prototype Pineapple hub has only two inner pineapple flanges. Due to the unrefined surface, it can be assumed that the outer flanges were turned off only after anodizing. This hub prototype can be used to build an aerodynamically designed front wheel because the spokes have a very steep pitch and are thus almost in line with the rim. Accordingly, the good aerodynamics is at the expense of lateral stiffness. This prototype never went into production and gives the impression of a complete false construction. Interesting detail: In contrast to the standard Pineapple front wheel hub, the spacers here have an Allen key, so that the hub can be dismantled more easily and without a cone key. This saves another few grams of weight. 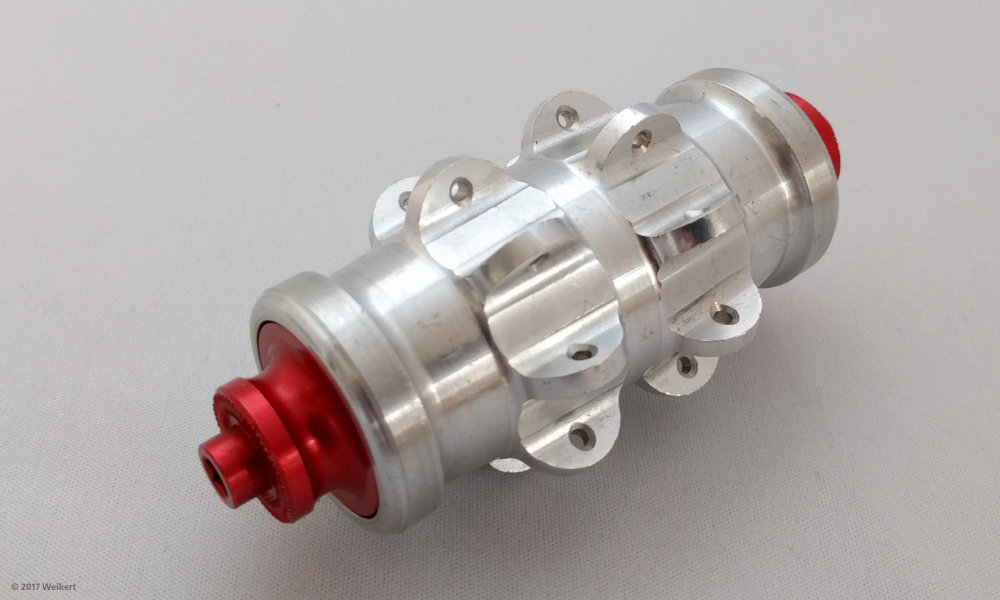 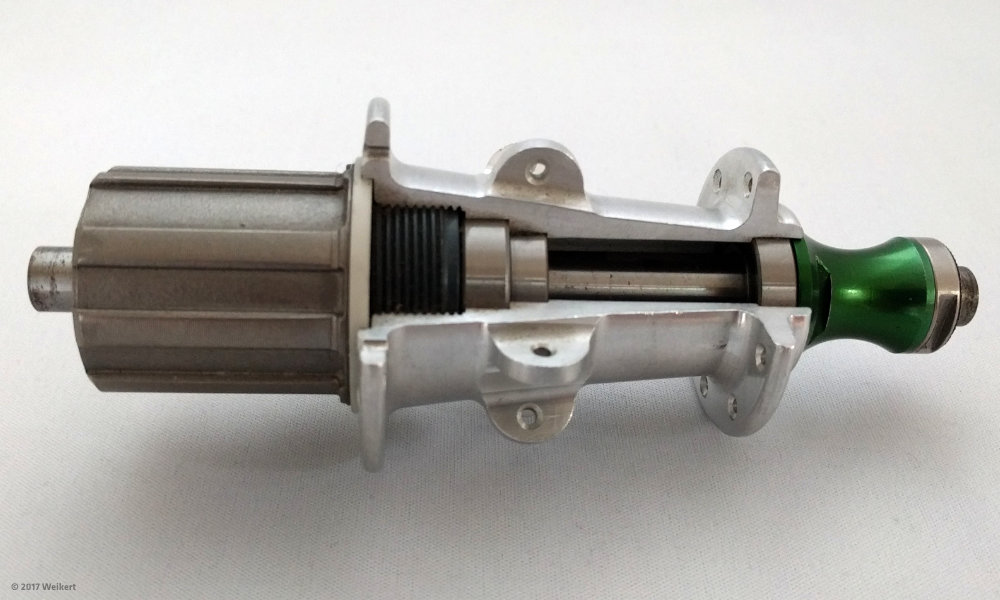 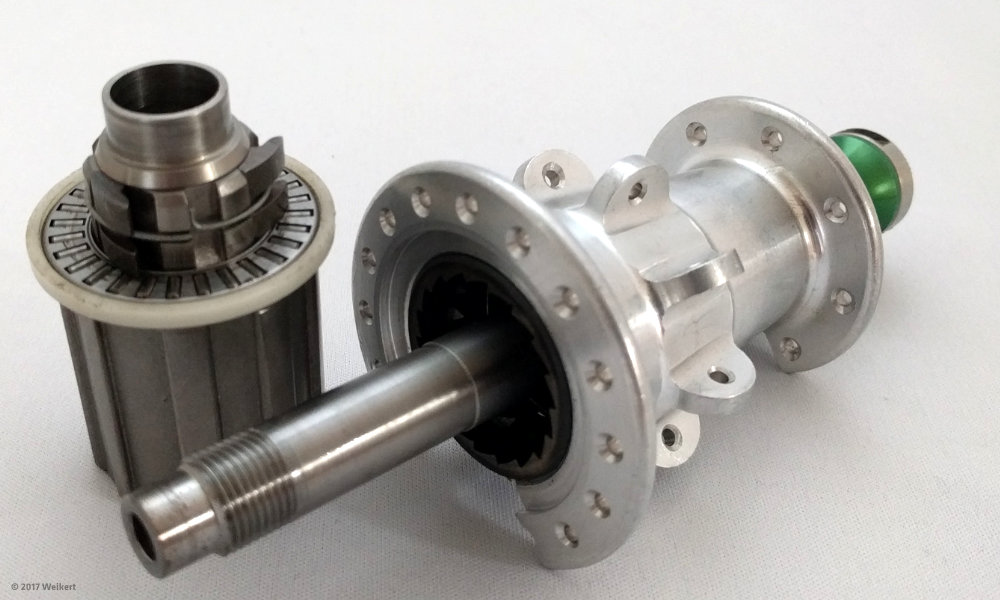 The titanium freehub uses 3 pawls and is unusually loud. It engages in a grid, which, similar to the toothed disc holder at Hügi, is screwed directly into the hub body. The freewheel body is fixed with a spacer, which is screwed onto the axle (M12x1). The spacer can be disassembled with a normal cone wrench, then the freewheel body can be removed without further tools by hand. Another special feature is the large quick release axle diameter. Advice on special quick release with thicker axes missing so far. The rarity, especially the rear hub, in addition to a low production volume due to the fact that the Pineapple rear hubs allegedly had frequent dropouts. Apparently it has not been able to permanently connect the freewheel body frictionally with the hub. 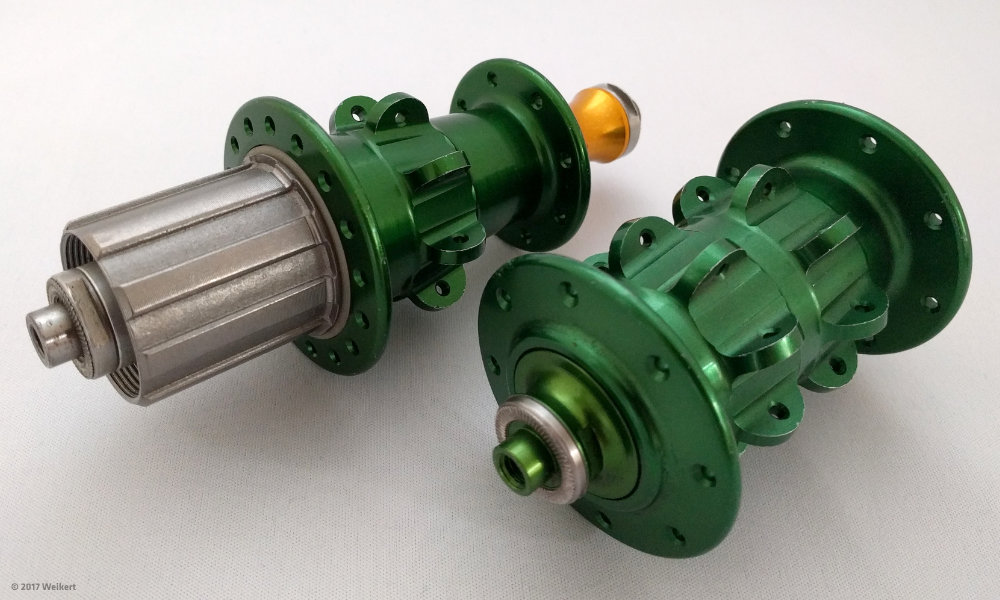 From the hub there are two slightly different versions: In one version, the hub body is evenly tapered (as in the picture), while in the other version, the hub body has an additional "step", as in the Kegg Hub (see below). Against the background of the rumored problems with the freewheel and the standard Shimano freewheel of the Kegg Hub, it seems that the step version was an attempt to tackle the freewheeling problems using established standards. 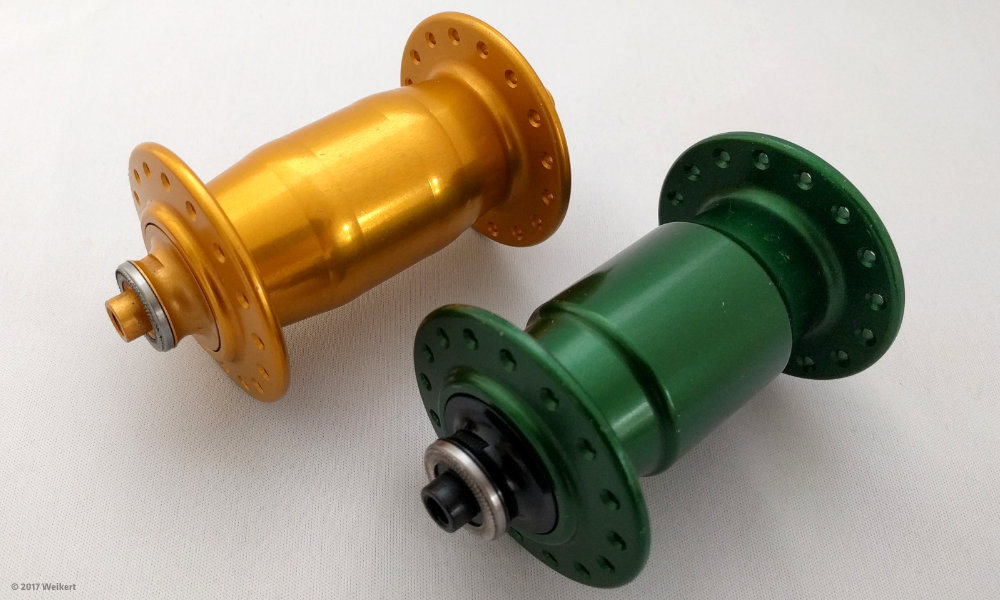 The XLR8 rear hub has a Shimano freewheel. The right spacer is just plugged in and has an O-ring that fixes the part on the axle. The spacer of the left side is screwed. The same hub was also sold with the imprint "Power Kegg" (an allegory for Powder Keg = Powder Keg). Dismantling requires tools, it is not possible to remove the freewheel by hand, as with the Pineapple HR hubs. 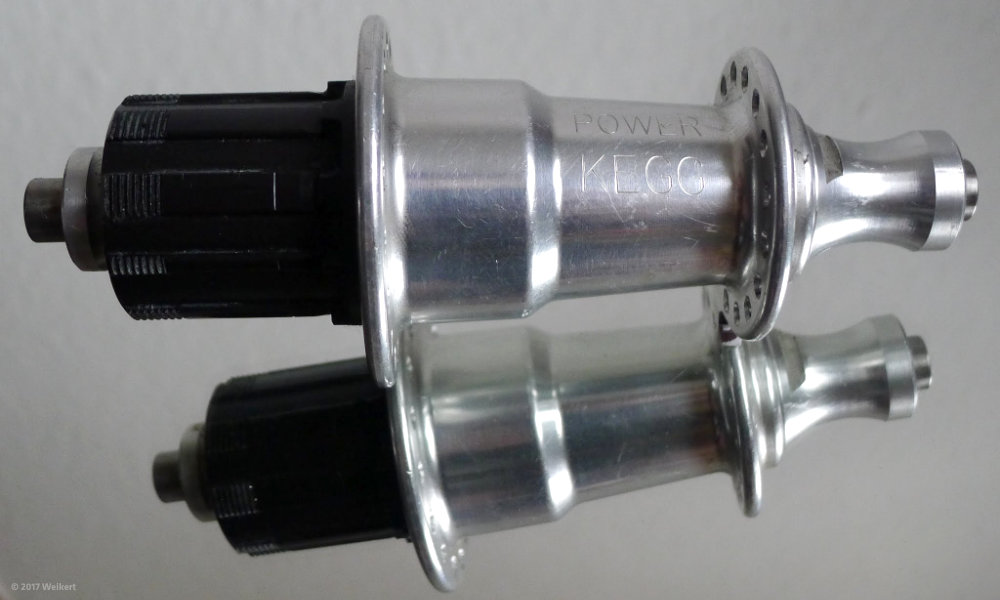 The axis of the XLR8 / Kegg HR hub is similar to the pineapple hub, but differs from it: It has two grooves, are used in the snap rings. In addition, the threads at the axle ends seem to have a minimum thread pitch other than the pineapple axis. The spacers are therefore not freely interchangeable. 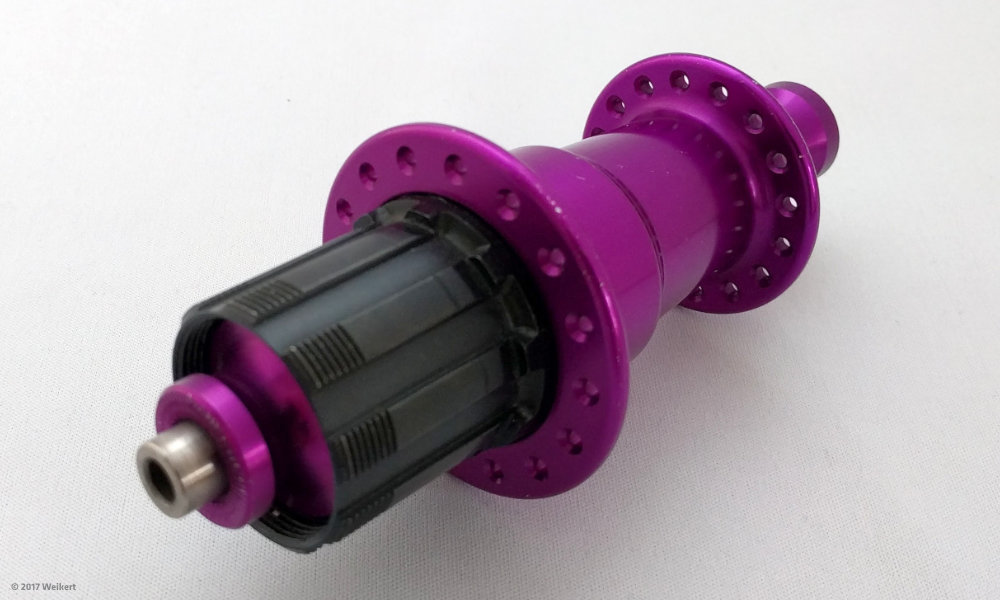 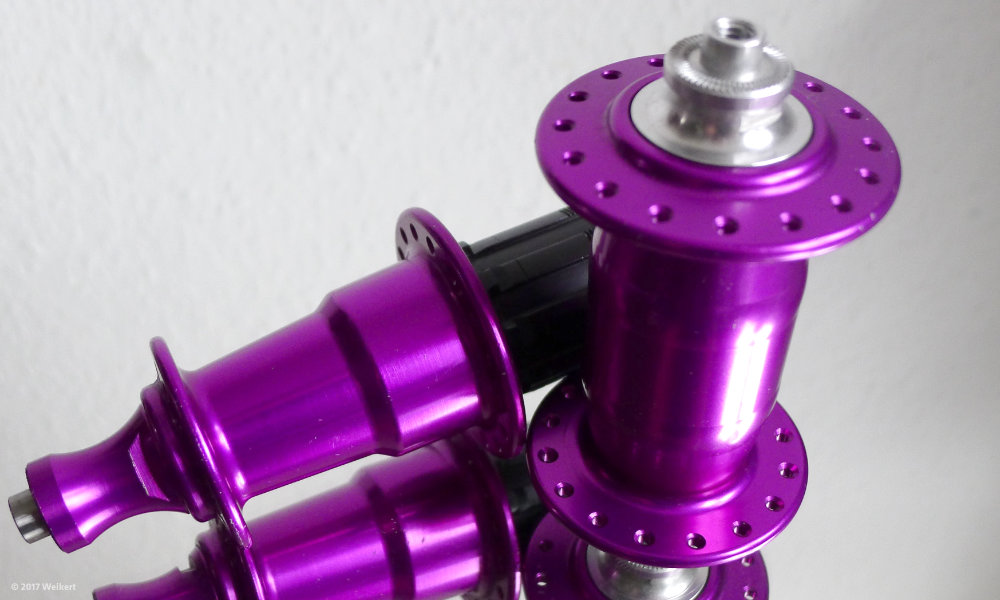 Notes on the given data:

All dimensions and weights were determined by the manufacturer and sometimes differ from the manufacturer's catalog information. Weight in grams, mounting dimensions in millimeters, flange center-to-center distances measured, outer flange diameter measured.