SIMSON SR50 - the youngest scooter from the GDR 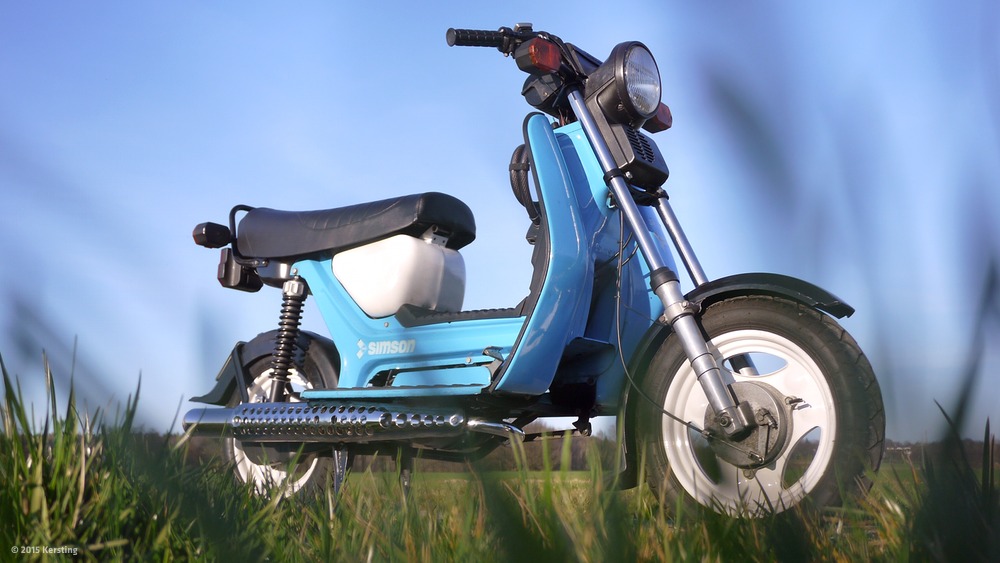 The term "SR50" stands for SIMSON for "Stadtroller" with 50ccm. Nevertheless, he is allowed to run despite insurance license good 60 km / h, thanks to a dispensation even today. The condition for this is that the scooter was registered in the former GDR times. This of course makes the SIMSON models very attractive today. It is by far the fastest two-wheeler that you can drive in Germany with a simple driver's license. Since I'm a much older following my scooter era MZ motorcycle from 1969 restored, is my SR50 year '90 almost only in the garage. Reason enough to show a few nice photos and to report back years after years as a scooter driver on the quite unusual DDR-scooter construction.

The SR50 is the successor of the legendary Schwalbe and benefits with the models with good equipment from the last improvements that were realized in the late 80er years in the GDR: contactless ignition, 12V electrical system, halogen light, fuel-efficient carburetor, adjustable struts rear. For this, before 30 years, he also got a few new teething troubles, which the legendary swallow did not have, such as a constantly loosening Karm mother, a piercing fork at full braking and a often demolished plastic fender behind, which is pulled down so far that he likes to sit on curb crossings. Many of these teething troubles can be dealt with today with the right parts and know-how. If all repairs are carried out conscientiously, a SIMSON scooter usually runs a thousand kilometers very reliably and is extremely low maintenance. Until then, it is often a hard way, because there are a lot of craft boxes on the second hand market. Many of them turn out to be a sinfully expensive restoration object for lovers, because these two-wheelers are already 25 years old and gone through generations of youthful gunman hands.

Further links to the SIMSON scooter on 2Rad.nrw:

Special features of the SIMSON SR50 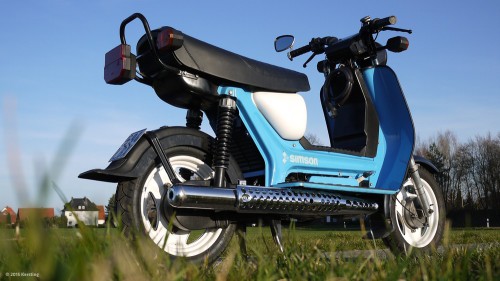 All SIMSON models are based on a clever modular principle, which saved a lot of money in the DDR at that time in the production of the various models. For example, the exhaust is the same for all newer 80er years models. I took this opportunity to decorate the beautiful chrome bag with the perforated heat protection of the SIMSON enduro model. The rear fender is torn and was simply mounted slightly higher. The tank must always be full of gas during the winter break, so that it does not rust from the inside. Meanwhile, I drive only with fully synthetic two-stroke oil, otherwise the exhaust adds about every 5.000 km with coal. 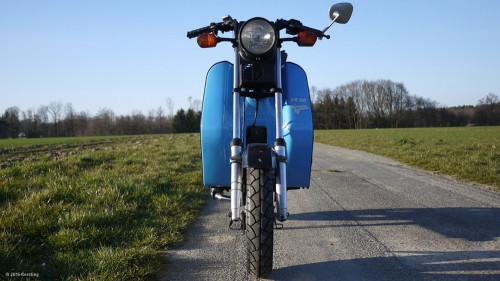 The bumpers are worth gold in the rain, because the driver remains largely dry behind. Unfortunately, they are made of so thin sheet metal that they like to get vibration cracks. Vibrations make the standard rearview mirror unusable. This was replaced by me by a much more stable copy of an MZ motorcycle. In principle, I would have had to paint it black. Noticeable for a scooter is also the downtilt steering link, the hours of driving make completely fatigue possible. In the upper picture is still the practical "bag holder" to recognize that I like to use in everyday life as a lock holder. 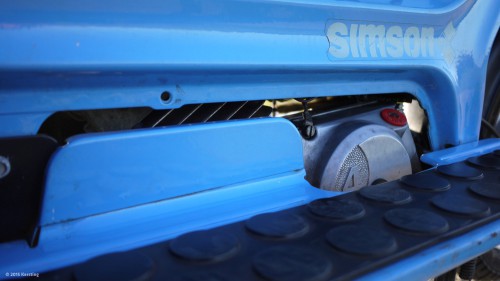 The air-cooled 50 ccm engine is known as a true powerhouse. It was developed together with the foot-operated four-speed gearbox for the steep mountains in the Thuringian Forest. For a scooter very unusual is the situation as a low-wing engine between the legs as the motorcycle. The thus very low center of gravity makes itself felt in the really exceptional road holding for a scooter. But the engine is by design slightly tilted forward, which makes measuring the oil level gambling. Even the rubber bearing engine mount does not always endure a whole scooter life. 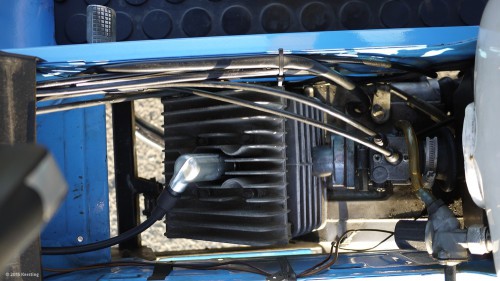 Due to the load changes during start-up and shifting, the engine moves so much that the manifold attachment has to be permanently replaced by a flexible ball flange with springs. Otherwise you destroy the manifold thread of the cylinder by constantly tightening the nut. In the photo you can also see that I have mounted a BING carburetor of the last series instead of the BVF carburetor. This rewards me with economical consumption of less than 3 liters of mixture at a permanent "near-top speed" of 55km / h as well as with absolutely no maintenance due to its more modern design. 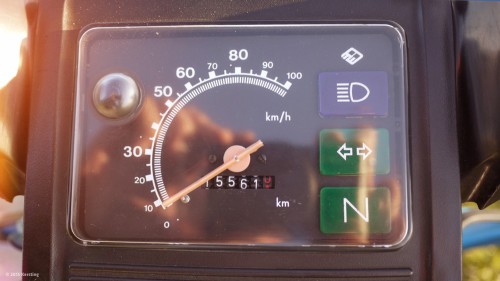 The so-called "instrument cluster" is made of plastic and is simply part of the brittle DDR charm of the 80er years. Downhill are unfressed top speeds of just under 80 km / h possible. There was also an 80ccm version as SIMSON-SR70, which was even faster, so the speedometer goes up to 100. The Tachonadel has no pointer damping and therefore wobbles violently. What is really missing is a gasoline watch or at least a trip meter. One tank of fuel is only enough for just 200 km. An additional bicycle tacho helps me to determine the exact speed and acts as a practical odometer. 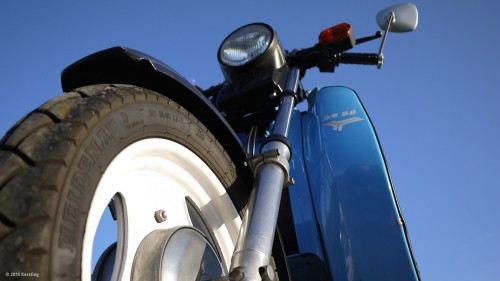 The wheels of the SR50 are quite big with 12 inches for a scooter. Together with the relatively narrow tires results in a precise straight-ahead and a smooth ride even on bad roads Many cities in the east of the Republic have cobblestones. Unfortunately, the telescopic fork turns out to be a real air pump with its soft springs. Despite unbelievable 13 cm travel the fork strikes with sharp braking. There are only hydraulic end stops, the fork itself is undamped. The installation of reinforced springs helps to reduce the problem. The last models of the SR50 are equipped with a much better Marzocchi fork. 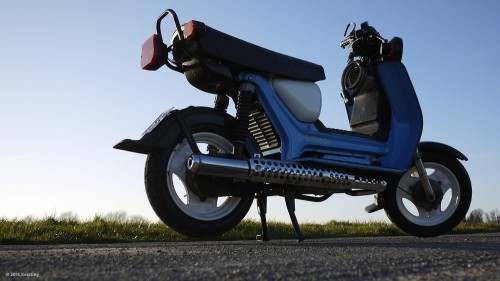 After nearly 14.000 driven kilometers in 3 years I know my way around with the SR 50. The scooter still offers a very intense two-stroke driving experience today, almost like a highly bred moped from the 70 years. It's so much fun to blow around. At first I put a lot of time into the repairs and even my own SIMSON SR50 website created, on which all tips and tricks can be found. Looking back, I could have put the time in a complete motorcycle restoration or in an even older SIMSON. But it was a good lesson to make friends with East's two-wheelers and age-old mopeds. After every ride I often ask myself today why I do not drive more often with this GDR classic car. The powerful engine spreads with its almost 4 PS an absolute two-stroke feeling with a rich sound, the super cool footswitch ensures a motorcycle feeling. The best use for the SR50 is always on hot summer days, when riding a motorcycle with boots and boots becomes torture. When shopping in the city or for long trips in the countryside, the old tin scooter is simply unbeatable. Except maybe by beautiful bicycles ...