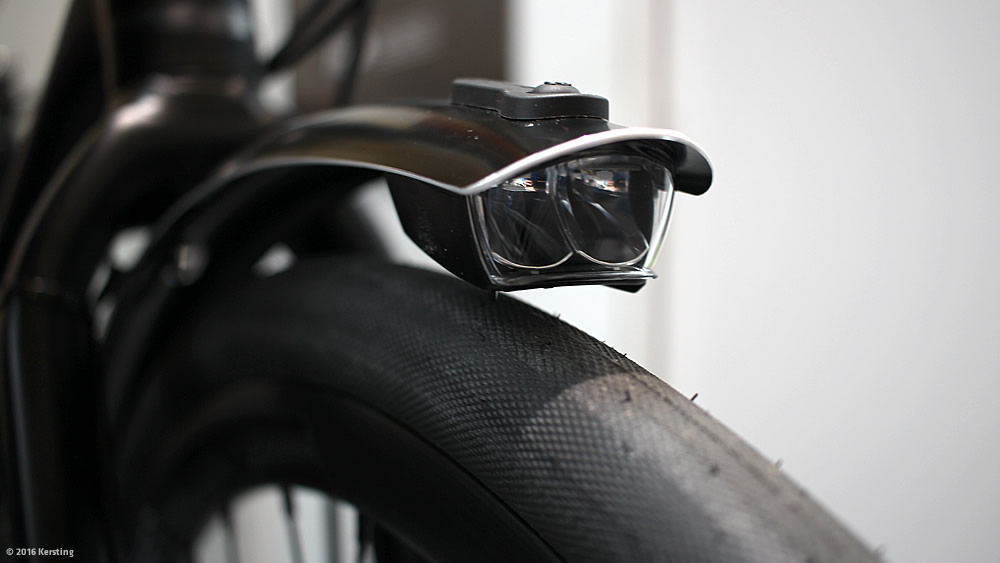 My bike tour today is only 4 km long and takes me to the Bielefeld Stadthalle for the bike fair. It's a cold Sunday in mid-March 2016 and if I'm honest then I find it too chilly for a bike show at 5 ° Celsius. Since I have already completed a bike ride to Werther in the morning, I shiver when I complete my bike in the very dull midday sun something. Winter just does not stop this year feeling colder than it really is.

At "the bag" at the Bielefeld train station, some people are already carrying wavering beer bottles in their hands. The district between the train station and Stadthalle is not exactly "clean". We go in and pay each 5, - Euro entry. I have never understood this fee as a bicycle freak in the last few years. She kept me away from this event for four years, because I did not know why the Bielefeld bicycle dealers demand entrance fees for a sales-promoting, small bicycle show with perceived 20 stalls. I understand it now - not in the fifth year of the fair yet, but I am now convinced of a serious advantage for all fair visitors inside: It really only bike-interested visitors come in, and not those who are elsewhere through the Sunday bored.

As an advantage but you can enjoy motivated retailers who take time for counseling, no completely crowded aisles and thank God not equal to 20 food stalls. In retrospect, I find the 5, - EUR charge great!

What on this Bielefeld bike fair (Website unfortunately offline) right at the entrance to the ubiquitous OWL car sales booths have to look at me in the context of a two-wheeler fair, however, not at all. They seem to be about as out of place as Atomic-World currywurst booths at a Green party convention. A little more sensitivity would certainly be good. 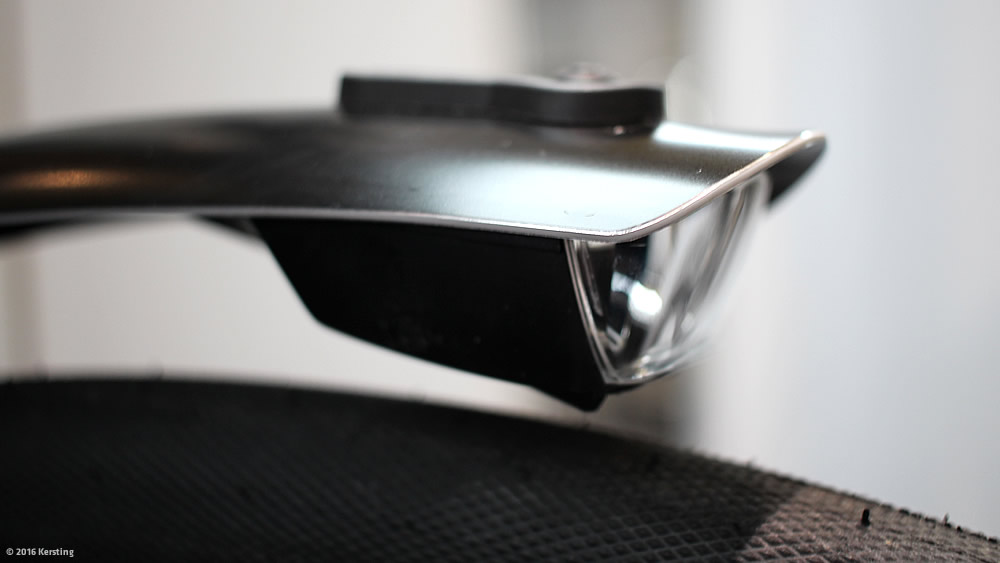 At the second booth I notice a very nice fender. The Curana CLite fender consists of a plastic body around which are sandwiched two very thin sheets of aluminum. The whole thing looks very noble and is of very flat design. A tiny little LED spotlight is attached underneath. Formally a dream without a doubt. 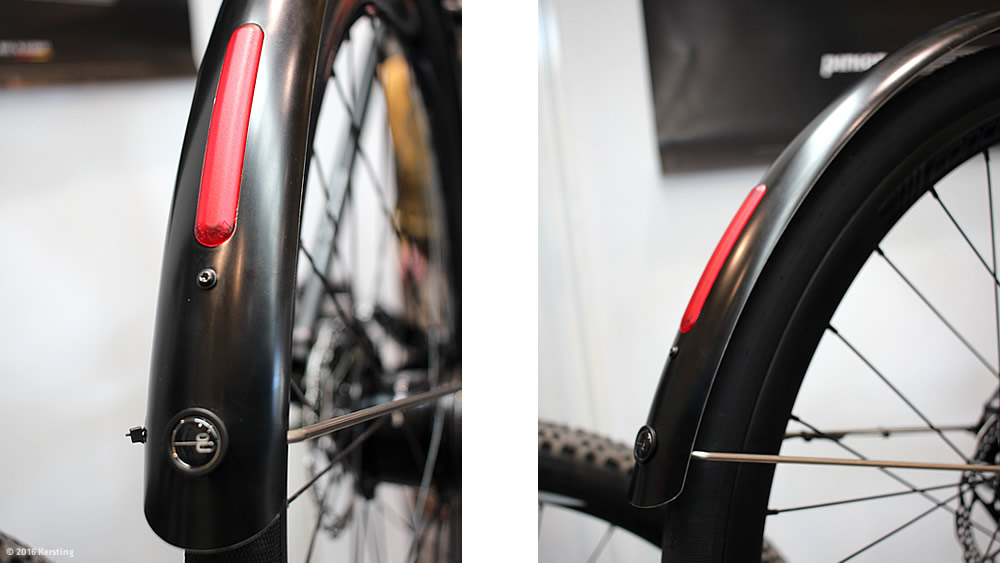 Even from the rear, this is a really nice solution: In the Curana CLite an extremely flat LED tail light has been integrated. Very nice, really. Whether it also corresponds to the road traffic regulations but I doubt it, because front and rear reflectors are missing. Nevertheless - finally, clean integrated technology, instead of screwed Klimbim. If you look online in the technical data of > Curana.com, there is currently very little information from the Belgian company. On Amazon, there are light fenders in different widths with a slightly heavier mounting kit - but unfortunately nowhere the right bicycle lamps. 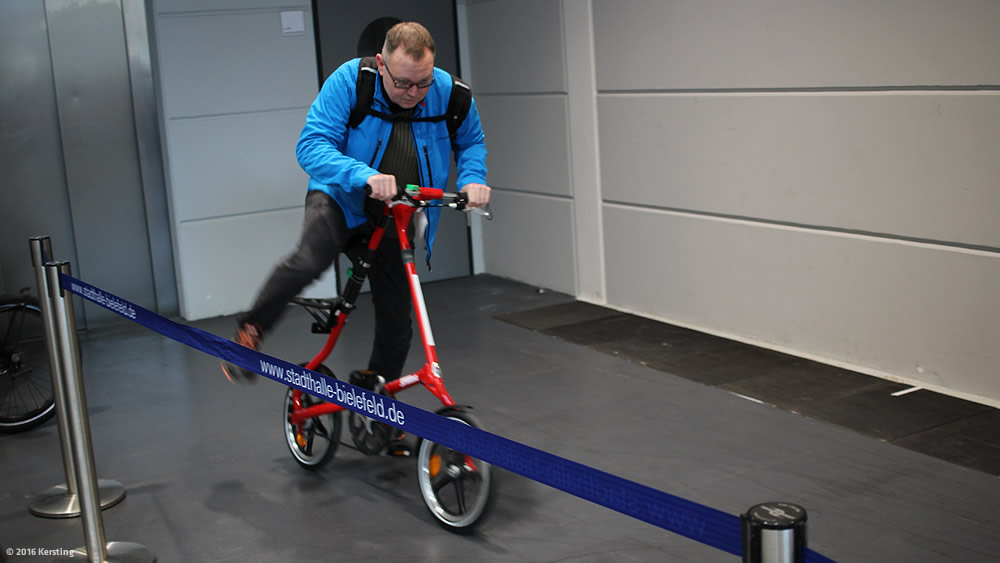 Cleverly, a small part of the exhibition grounds is closed off for test drives. I have the honor to test a triangular Strida folding bike. 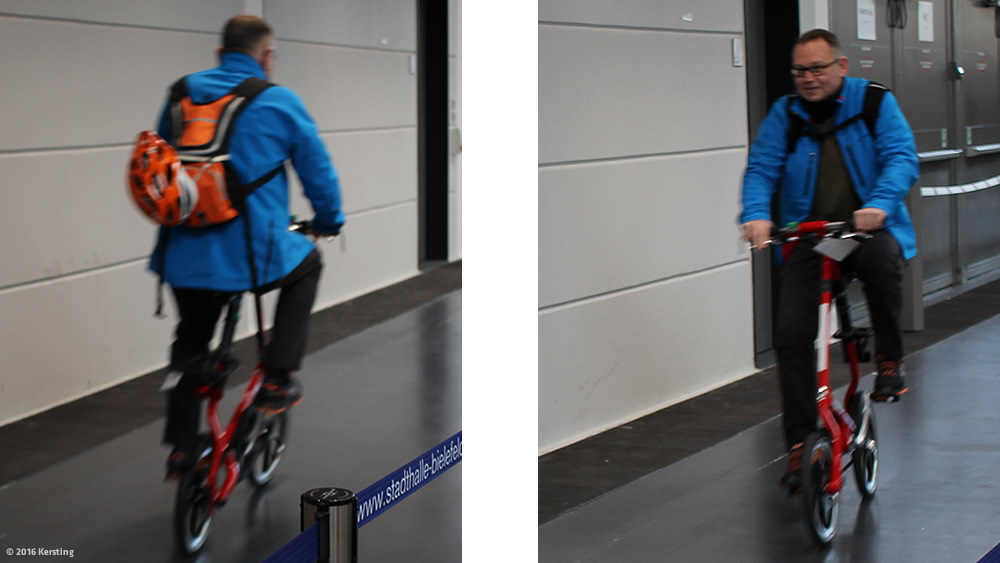 Tiny 16 "wheels on a simple delta frame concept from the penultimate century give me an amazingly mature driving experience. The ultra-compact design of the folding bike is amazing. In the photo on the right you can really see the pure driving pleasure. The concept convinces me right down to a small detail ... 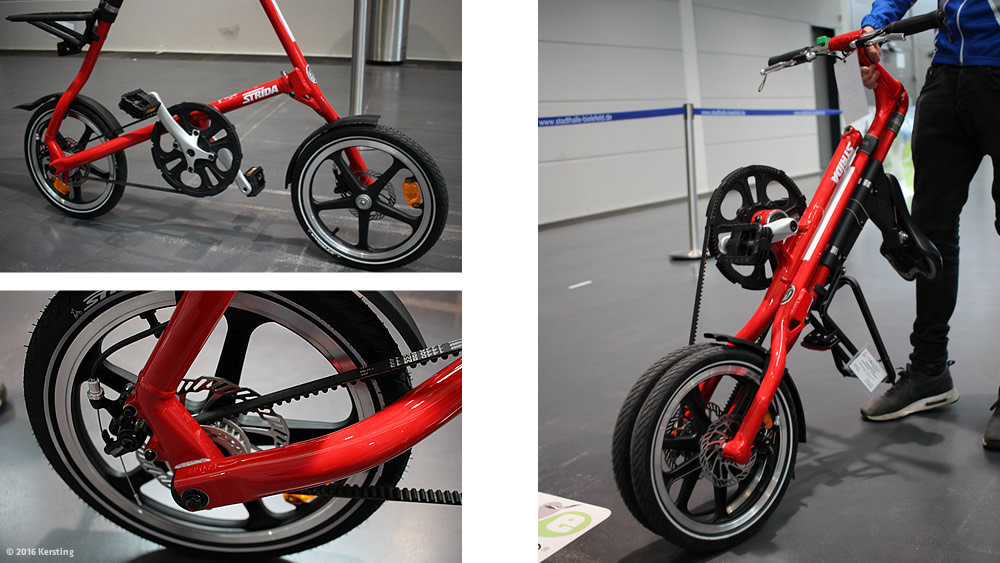 The steering head angle is, however, as usual with chopper motorcycles getting used to. It makes the wheel tilt at low speeds due to the extreme angle. It's not the first folding bike I've tested, it's the bike with the strongest fork slope I've ever driven. Whether I could get used to it in the long run, I do not know. Brakes, drive and frame convince me completely. Also, the folding mechanism is worked out to the smallest detail. There are from > Strida.de even better and lighter models, sometimes weigh significantly less than 10 kg. For people who use the bike daily, for example in London as a minimal folding bike in the train, it is truly a brilliant invention. In Germany, radical, mobile trends are only just beginning to arrive very slowly. 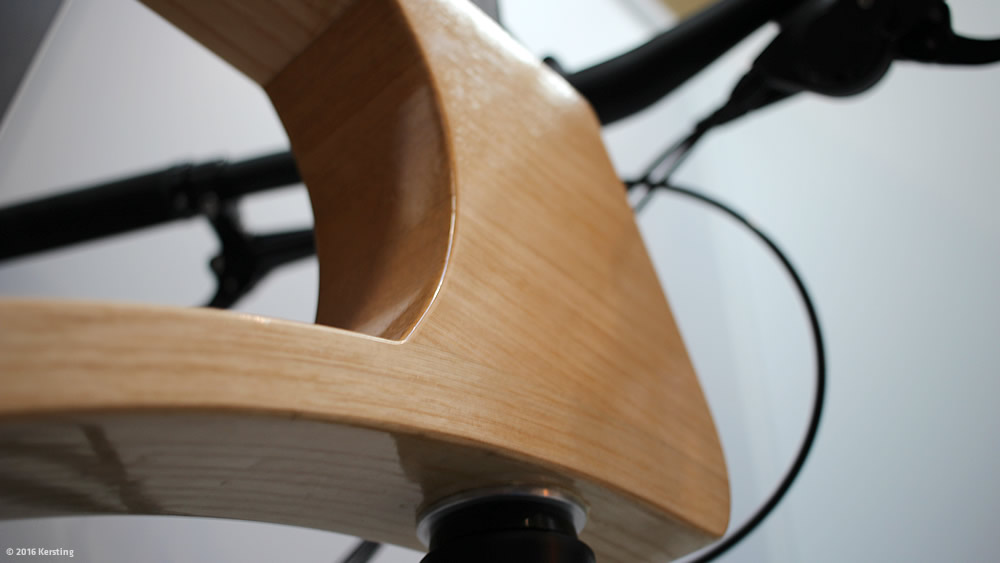 What you can do with wood, showed a skilled carpenter from Steinhagen at the bicycle exhibition ... 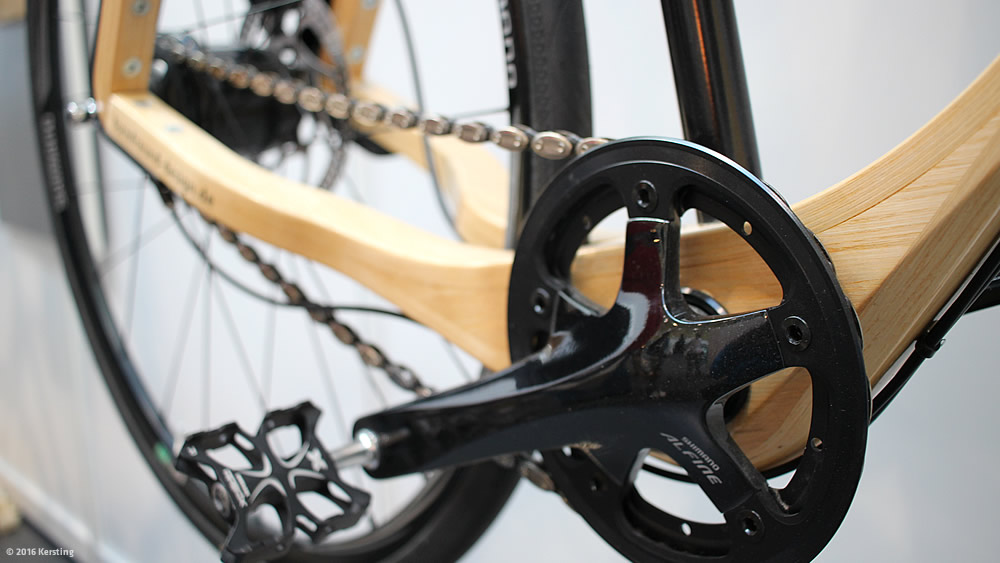 ... the bike with the wooden frame was not exactly light, but it was perfectly built for craftsmanship. 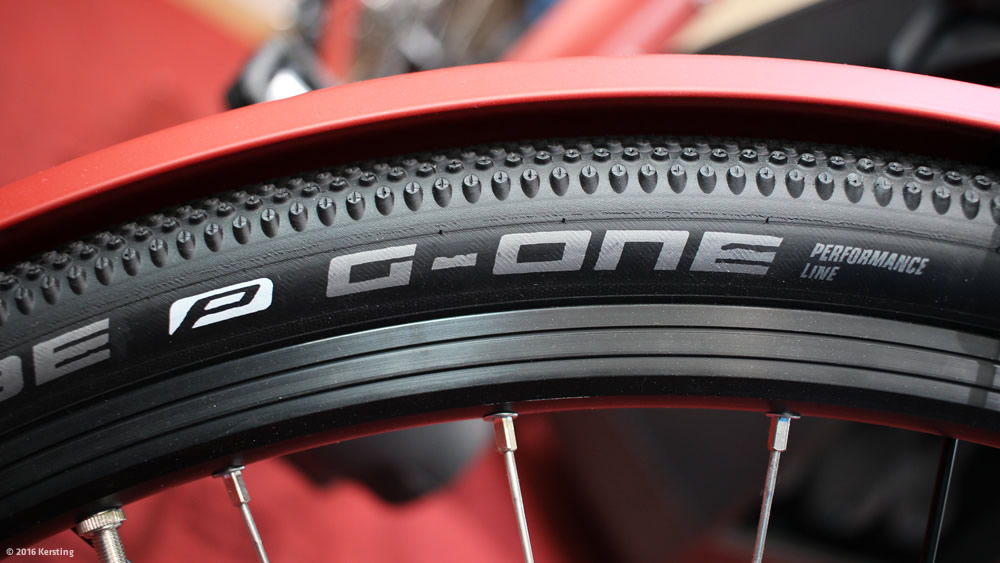 For me personally, this photo as a cross-bike rider, of course, a feast for the eyes: the company Schwalbe has designed the G-One a very light road bike tires, which is made a bit for off-road, but still as an all-round touring tire with the Focus street can apply. Currently the > Schwalbe G-One available in the dimension 27,5 and 28 inches. According to the manufacturer, he should roll extremely easily ... 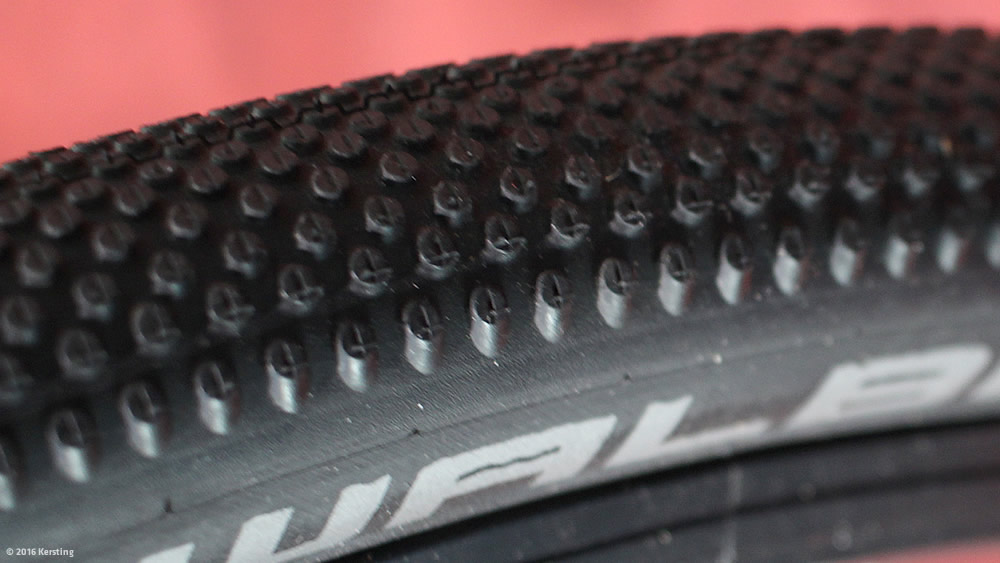 But I have to swallow the sales price: This professional forest and meadow bicycle tire from Schwalbe costs almost as much as a car tire. The target group are recreational athletes. Then one wonders if one should not switch directly to the car at these prices. After all, car tires with moderate driving 50.000 kilometers. Nevertheless, a chic Pelle, which I would like to test on a bike ride ... 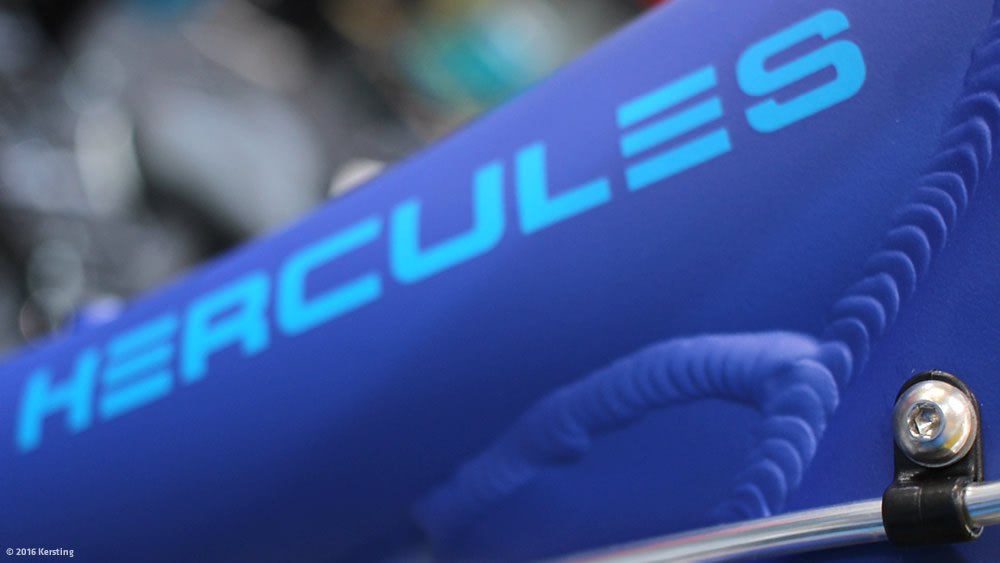 Hercules presents 2016 in all modern colors. The velvet blue special paint really amazed me. Hercules used to be a well-known bicycle, moped and motorcycle manufacturer in the 19. Century as Nuremberg Velozipedfabrik Hercules firmierte. After three or four acquisitions of the company after the Second World War, the remaining bicycles are now being built in Hungary and Asia. 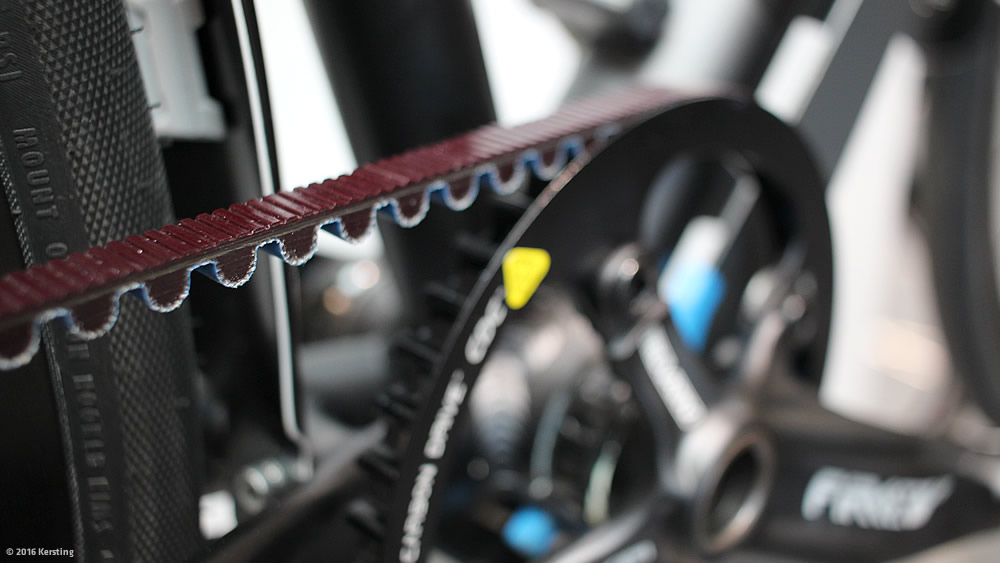 Timing belt drives are still a big topic. With all the advantages, such as longevity, low maintenance and no oil-smeared pants more cost while pedaling but a little more power than a conventional roller chain. 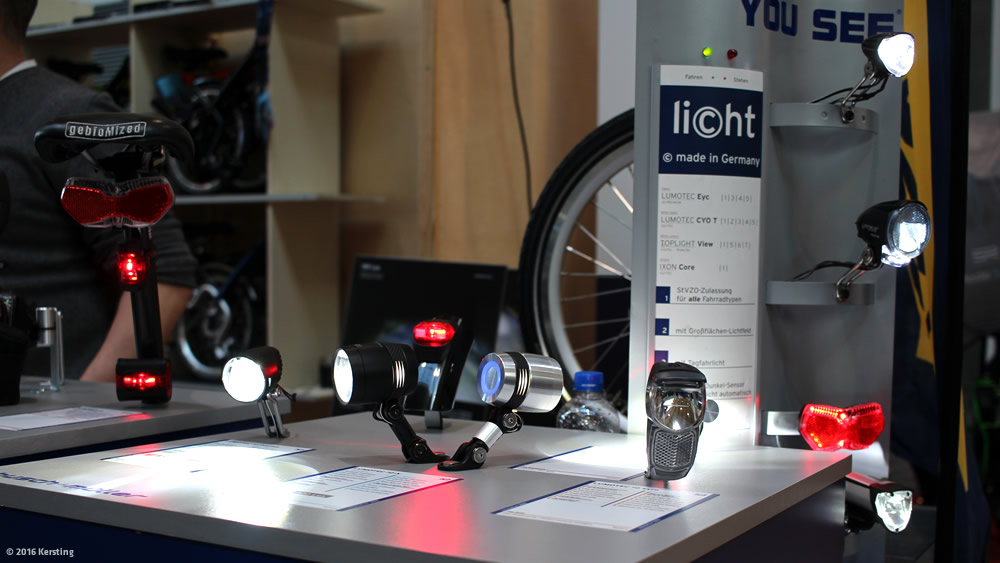 "Fine Wheels" included the portfolio of Busch and Müller Fahrrrad luminaires. Up to 100 Lux ... 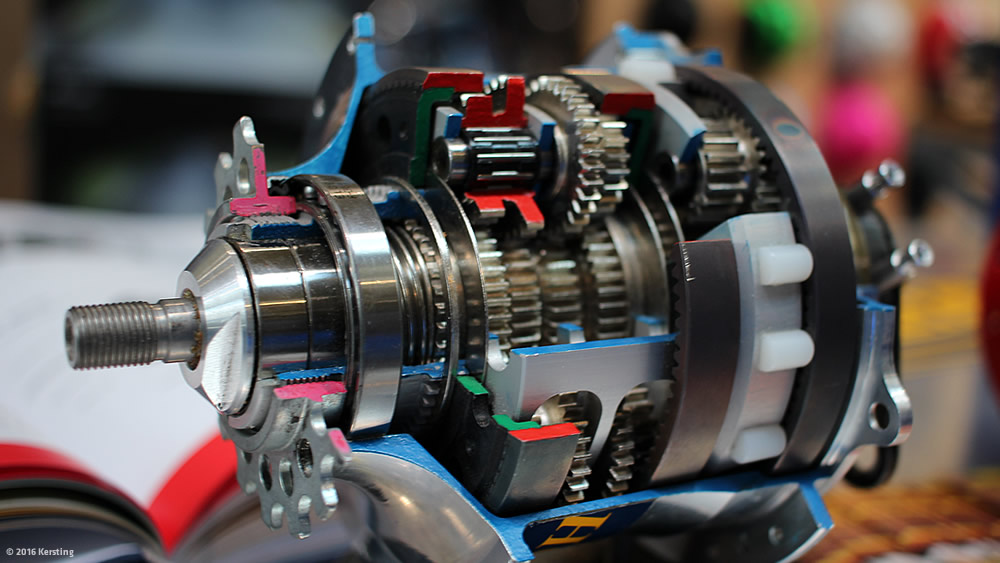 ... and a cutaway Rohloff gearbox hub. I find it hard to imagine that these little gears can carry all the power of cycling, but it works perfectly. Rohloff currently produces the best gear hubs in the world. 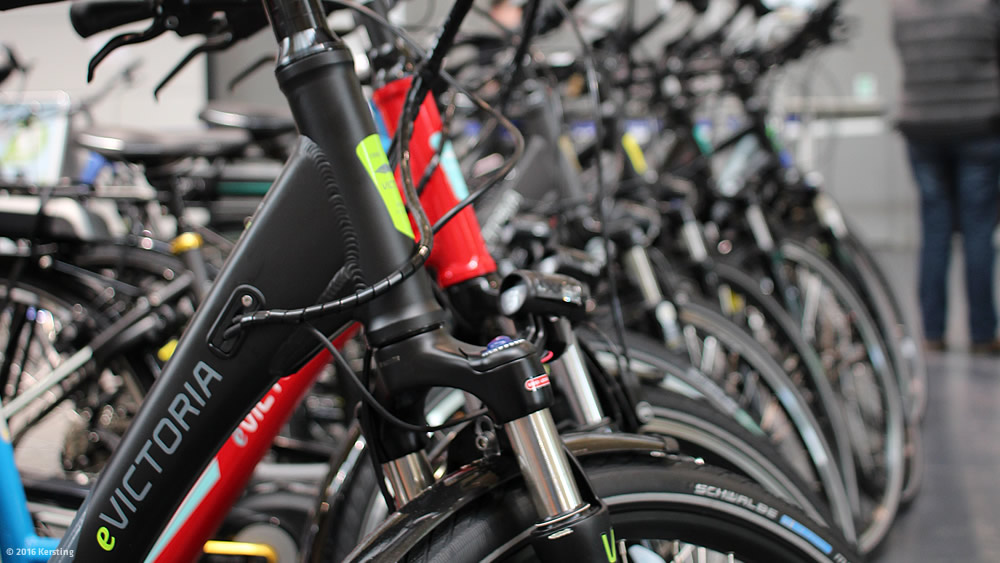 These were my impressions of the Xesum fair from Bielefeld. Even in the fifth year, the Bielefeld bike fair is still too small for a future-oriented, mobile-equipped two-wheeled city, which was once with many glorious manufacturers. One should not expect too much today: It is primarily the fifteen largest Bielefeld bike dealers who show the latest technology and two-wheeler trends of their brands and really make an effort.

Anyone who has ever been on larger two-wheeler meals such as the IFMA, but recognizes immediately that real trends are sold here rather than made. It does not go much further than a mere briefing from the seller to the consumer (B to C). One recognizes this already because hardly any manufacturers, but only local dealers are. In other words, as an interested consumer, you can have a good hour of fun, get informed, and even try out a few bikes. Around 6.000 visitors visited the Bielefeld Exhibition Center this year.